The sixth edition of the UEFA Super Cup took place in the Fall of 1978, between the winner of the Champions Cup, Liverpool and the winners of the Cup Winners Cup, Anderlecht.

The English side Liverpool were the defending Super Cup Champions and had won their second straight Champions Cup after defeating Belgian side Club Brugge (1-0) at Wembley on May 10th, 1978.
They were continuing a dynasty at the top level following UEFA Cup wins in 1973 and 1976 and the Champions Cup in 1977.
The English contingent of Clemence, Neal, Smith, Thompson, Alan and Ray Kennedy, Case, McDermott were complemented with the Scottish trio of Dalglish, Souness and Hansen

The Belgian side Anderlecht were also having their greatest era on the European Stage. They had just won their second Cup Winners Cup in three years on May 3rd, 1978 at Paris by defeating Austria’s FK Austria Vienna (4-0).
The side contained a mix of Belgian and Dutch Internationals.
The Belgians included the likes of Ludo Coeck, Van der Elst and Vercauteren.
The Dutch stars included Rensenbrink, Haan and Geels, to name a few,
Anderlecht had won this trophy just two years prior by defeating the mighty Bayern Munich.
It was hard to pick favorites between two of the greatest teams of the decade.

The first leg was played on December 4th, 1978 at Brussels’ Emile Versé Stadium.
For Liverpool, their veteran Captain Emlyn Hughes was not a regular by this time. He nevertheless started as Phil Thompson was injured.
As the home team, Anderlecht were intent on attacking to build up a margin. They took the lead through a header by Vercauteren in the 17th minute after a fine cross from the right side from Resenebrink.
Just ten minutes later, Jimmy Case leveled the score from a long-range shot.
Anderlecht continued attacking and were rewarded in the 38th minute, when Van der Elst struck home another cross from the right side.
With just minutes remaining, Rensenbrink struck a decisive third goal to make the Belgians’ cushion stronger for the second leg.
Liverpool Manager Bob Paisley was very critical of his team's performance, he said, “We threw it away, our attitude was wrong and we were careless. Anderlecht are a great team going forward, but we never attacked them as we should. Our approach seems to have gone a bit wrong and we've lost our scoring touch where earlier in the season our finishing was great."
A two-goal margin was not beyond Liverpool and there was a lot to play for in the second leg despite Anderlecht’s dominance.

The Second Leg took place at Liverpool’s Anfield Stadium on December 19th, 1978.
Liverpool made a few changes from the first leg. Starting goalkeeper Ray Clemence had been injured in training. Steve Ogrizovic would deputize for him in goal.
Phil Thompson was back in the squad with Alan Kennedy making way. In attack, David Fairclough started ahead of David Johnson.
Anderlecht made two changes to their own squad.
Gilbert van Binst and Matty van Toom started ahead of Broos and Benny Nielsen.
The conditions for this return leg were farcical, as the pitch was frosty and a fog covered the entire ground.
The conditions forced the match to start 15 minutes late. Not that it made a difference as no one in the stands could see the action on the field.
Liverpool attacked from the start, as they had to make up a deficit.
They took the lead in the 13th minute, when Emlyn Hughes knocked in a rebound after De Bree had parried Jimmy Case’s shot.
It was reported that after Liverpool’s goal, the fans chanted, "Oggy, Oggy (Ogrizovic) tell us who scored", since they could not see the action on the field.
Liverpool continued to dominate with Souness and McDermott controlling the midfield.
At halftime, Anderlecht replaced the injured Geels with Martens.
The Belgians started attacking after halftime and started creating chances.
They tied the match in the 71st minute through Van der Elst. This more or less sealed the tie as Liverpool had to score twice more in twenty minutes just to force overtime.
Liverpool did manage to score just before the end through Fairclough but to no avail. Despite Liverpool’s (2-1) win. Anderlecht won the tie (4-3) on aggregate to win their second UEFA Super Cup in three seasons.

Following the match, Referee Nicolae Rainea justified his decision to play by stating, “When I went out there before kick-off I decided I could see well enough and so I decided to play. I am afraid many spectators would not get a very clear view but there was no time I had any thoughts of abandoning the game.".
In contrast Liverpool Manager Bob Paisley was very critical of Rainea’s decision to allow the match to go on, Paisley said, “You can't play football in conditions like that, it's ridiculous.”
He suggested the competition should be played in April with better weather.
He added, "I think a match like this, between two leading team should be played in better weather, say in April. I know it's difficult, but it's farcical when good players like these have to slither about in fog and can't see each other….It was farcical playing the game in such conditions. There is no way an important game should have been played tonight….My main concern was that somebody might get hurt. Luckily nobody did. I wanted to play this match in April when it would have been a real decider between the winners of the two big European Cups. Then we would have had 40,000 here and they would have seen a good spectacle.”
Paisley’s desire in April was wishful thinking at best as the Semifinals of the European Cup Competitions regularly took place in that month.
The scheduling of this competition would be a point of contention for the upcoming decades.

Team Captain: Kenny Dalglish
Official Kit Supplier/Designer: Umbro
Uniform Colors: Red Shirts, Red Shorts, Red Socks
Note: Kenny Dalglish is named as the Captain in many sources, however, in the video highlights of the match Emlyn Hughes is shown with the armband after scoring.


Liverpool Team for these matches:

Note:
Some information for unused substitutes may not be available, therefore these are the players on and off the field that are verified to have been present). 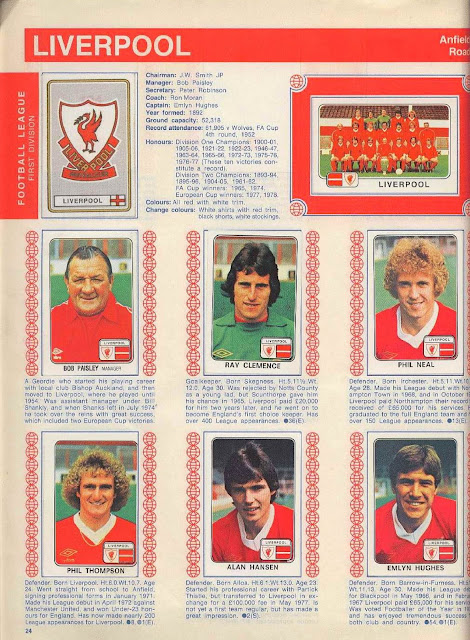 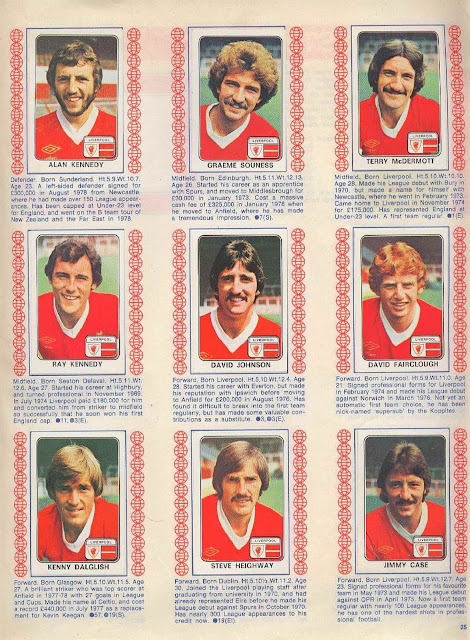 RSC Anderlecht Team for these matches:

Note:
Some information for unused substitutes may not be available, therefore these are the players on and off the field that are verified to have been present). 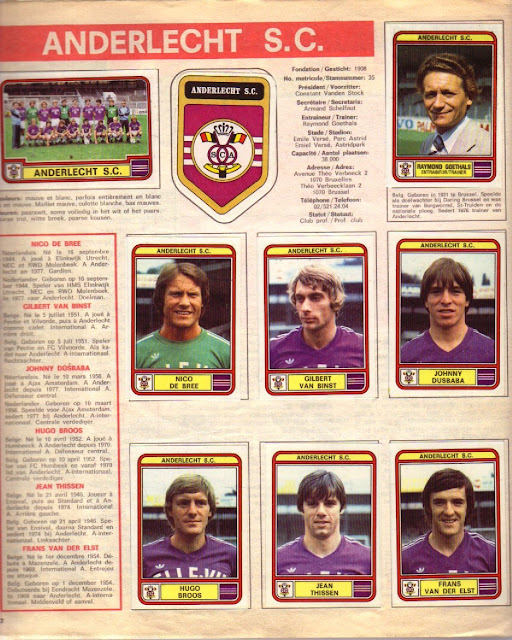