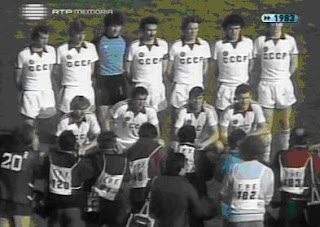 -The previous match between the nations, as well as USSR’s previous and only victory over Portugal, was the first leg of this qualifier, played in Moscow on April 27, 1983, that USSR won 5-0.
Portugal players: Bento, Carlos Manuel, Pacheco and Gomes and USSR Players: Dassayev, Sulakvelidze, Chivadze, Baltacha, Demianenko, Oganesian, Rodionov, Cherenkov and Blokhin also took part in that match.
Cherenkov, Rodionov and Demianenko scored for USSR.

-Portugal’s previous win over USSR was during Brazil Independence Cup, played in Belo Horizonte on July 6, 1972, that Portugal won 1 to 0.
Portugal player Jordao was the only player who also took part in that match, in fact he also scored Portugal’s winner. 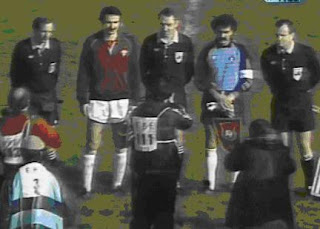 -Portugal was awarded their penalty kick after Chalana was fouled by Borovsky in the box.
Television replays showed that the foul had been committed outside the box.

-Portugal qualified for the Finals of the European Championships from this group. This group also contained Poland and Finland.
Portugal won all its matches in this group except the first leg vs. USSR.
USSR only needed to tie to qualify.

-This was Portugal’s first ever qualification for the Euro Finals, as well as its first qualification of any kind, since the 1966 World Cup.

-Soviet manager Valeri Lobanovsky (concurrently the Dinamo Kiev coach) was dismissed following non-qualification. He had been appointed after the 1982 World Cup.
Eduard Vasilievich Malofeyev replaced Lobanovsky from 1984.
Malofeyev held on to the post until just before the 1986 World Cup, where Valeri Lobanovsky replaced him.

-Valeri Lobanovsky has also managed the Ukraine National team, as has Oleg Blokhin. Blokhin is the current manager of Ukraine.

-Both teams’ players were home based.

-Goalscorer Rui Jordao was the Sporting Lisbon based player, the rest of the Portugal squad were from Benfica and Porto.
Jordao himself is a former Benfica player.
Jordao also struck post in 2nd half.

At the end of the season during the 1984 European Championships, Rui Jordao scored two goals vs. France.

-Portugal’s all 4 defenders were from Porto. During the entire league campaign they gave up only 9 goals.

-The Porto players reached the final of Cup Winners Cup at the end of the season, but lost 1 to 2 to Juventus.

-The Benfica players were Portuguese League Champions at the end of the season.

-USSR squad did not contain a single Dnepr player who had just won the league title.

-Brazilian Otto Martins Gloria had left his post as manager of Portugal at the conclusion of the previous season, disgusted with the big clubs’ refusal to release players when needed.

-A 4-man commission managed Portugal National team
Fernando Cabrita, Antonio Morais (from Porto), Antonio Oliveira ‘Toni’ (Benfica assistant manager) and Jose Augusto.
Cabrita, Otto Gloria’s assistant, acted as the spokesman of the commission.
This commission was in place until the conclusion of the Euro Finals, after which Jose Torres was appointed.

-The Benfica players were playing in their home stadium.

-Chivadze and Sulakvelidze won the Cup Winners Cup with Dinamo Tblissi in 1981.

- Baltacha, Demianenko, Bal, Yevtushenko and Blokhin won the Cup Winners Cup with Dinamo Kiev in 1986.
Blokhin also won it in 1975.

-The Porto and Dinamo Kiev players were paired against each other during the semi-finals of the 1987 Champions Cup. Porto won both legs 2 to 1.

-As pointed out in previous entries Manuel Bento and Valeri Lobanovsky have since passed away.

-Porto’s Fernando Gomes had been Europe’s top goalscorer the previous season with 36 goals. He would also be Europe’s highest goalscorer in 1985 with 39 goals.

-Jamie Pacheco managed Boavista to the league title in 2001. The first and only time since 1946 that one of the big three did not win the League title.

-Fernando Chalana joined Bordeaux at the end of the season.

When Media Mogul Silvio Berlusconi took control of AC Milan in the spring of 1986, the team had not won a scudetto since 1979 and had gone through its worst period in history by being relegated twice in the previous five years. (For Match Fixing Scandal as well as sporting reasons).
The previous President Giuseppe Farina had fled to South Africa amid the scandals.
Berlusconi came with a grand vision of winning trophies and titles.
The team was still being managed with veteran Swede Nils Liedholm.
The team already contained a backbone of Italian players who had played together for years.
The defense was already being led by Captain and standard-bearer Franco Baresi and supported by Mauro Tassoti, Fillipo Galli and a teenage Paolo Maldini.

Midfielder Alberigo Evani as well as veteran striker Pietro-Paolo Virdis was mainstays for many seasons now.
The foreign players on the books were the English pair of Mark Hateley and Ray Wilkins.
Berlusconi made a number of key signings for his first full season at the helm (1986/87).
He offloaded a fading Paolo Rossi and signed Verona’s Giuseppe Galderisi as striker.
He signed midfielder Roberto Donadoni from Atalanta to strengthen the midfield.
From Fiorentina, National Team goalkeeper Giovanni Galli and striker Daniele Massaro came on board.
Argentina’s new wonder boy Claudio Borghi was signed from Argentinos Juniors in frame to be integrated in the next few years.
Berlusconi had already set his sights on the Dutch duo of Ruud Gullit and Marco van Basten, who many predicted a brilliant future.
That first season was saved with a UEFA Cup Play-off victory over Sampdoria. By then Liedholm had been relieved of his duties and replaced with Fabio Capello for the decisive few last weeks of the season.
Capello secured the qualification and then stepped aside and took a position in Berlusconi’s Finnivest Empire.
For the following season (1987/88), Berlusconi made more personnel changes.
Besides Gullit and van Basten, battle hardened midfielder Carlo Ancelloti was signed from AS Roma.
The English pair of Hateley and Wilkins departed to the French League to Monaco and Paris St Germain respectively.
While Galderisi also departed after a solitary season.
Berlusconi’s most important and unconventional decision was on the choice of manager. He had been impressed with Arrigo Sacchi, then an unknown manager at Parma. He was mostly impressed with Sacchi’s non-traditional (by Italian standards) attacking style of play.
Italy’s League was still entrenched in the defensive Catenaccio culture and low or no scoring games.

Sacchi openly preached an open attacking and pressing game. He preferred zonal marking to the traditional man-to-man marking so prevalent in Italy.
Berlusconi saw in him as the ideal manager to lead his new Milan, despite his lack of top-level experience, and in his case a non-existent playing career.
It took some time for this new Milan to click, as van Basten was injured early in the season and would miss a majority of it.

Gullit was simply sensational and took to the Serie A with ease in contrast to Juventus’ Ian Rush who was completely struggling in his first season.
For the early parts of the season, Milan was under the radar as Maradona’s Napoli, the defending Champions, was seemingly running away with the title.

When the two sides met in Milan in early January, AC Milan made their intents clear by soundly defeating Napoli 4 to 1.
From that point on, Milan went from win to win and reduced the deficit with Napoli with every passing week.
By the spring of 1988, Franco Baresi and midfielders Roberto Donadoni and Carlo Ancelloti were mainstays of the Italian National team.
Nineteen-year-old Paolo Maldini also made his national team debut and kept his place for over a decade.
Napoli was slowly imploding due to internal troubles.
With three matches remaining, Napoli and AC Milan met at Naples with Milan right on their heels.
By now van Basten had been back in the team for a few weeks, but clearly was not match fit enough to start.
With Gullit in inspired form, Milan defeated Napoli 3 to 2, with even substitute van Basten scoring, and overtook Napoli at the top of the table.
Milan held on for the two remaining matches and won the League title for the first time in almost a decade, by playing with the mindset of attack is the best form of defense.
AC Milan went on to win countless trophies domestically and in Europe for the next two decades and more.
Paolo Maldini retired in 2009 as the last holdout of this era.

This first title was the catalyst for seven Scudettos and five Champions League trophies.
Most importantly it changed the mentality of Italian soccer, as it slowly drifted away from Catenaccio.
It paved the way for other attack minded managers such as Zdenek Zeman and Nevio Scala to take center stage.
For the past two decades, the Italian League has been a higher scoring League and this can be traced to this historic title.

Articles on Teams and Events-Part 15

Analysis about Italy’s search for a reliable libero due to the retirement of Franco Baresi in the fall 1992
It is to be noted due to the lack of a reliable replacement, Barsei reversed his decision in a matter of weeks and returned to the national team
(Magazine / Language : Guerin Sportivo, October 14-20, 1992  / Italian)

A profile on the late Austrian defender Bruno Pezzey who palyed in the Bundesliga with Eintracht Frankfurt and Werder Bremen
(Magazine / Language : Fussball Magazin, March/April 1982/ German)