Dinamo Bucharest and SV Hamburg were paired in the Second Round of the 1983/84 Champions Cup.
The Romanian Club Dinamo Bucharest, managed by Nicolae Dumitru, were Romania’s Champions for two years running, on their way to their third title.
They were led by skipper and goalkeeper Dumitru Moraru and other Romanian Internationals such as Rednic, Dragnea, Andone and Augustin.
They had qualified from their opening Round by defeating Finnish Club Kuusysi Lahti  away and home (1-0 and 3-0 respectively).

The defending Champions Cup winners SV Hamburg of West Germany were a different side from the all-conquering squad of the previous years. Though, at the top of the League at the time, they were clearly not as strong as before.
Captain and veteran goalscorer Horst Hrubesch had been transfered to Belgium’s Standard Liege. While Danish striker Lars Bastrup had returned home to the Danish League.
The Hamburg hierarchy had felt Hrubesch was getting older and it was time for a younger replacement.
In their place, the Hamburg Management had acquired Dieter Schatzschneider and Wolfram Wuttke.
The team was managed by the Austrian Happel and contained a host of Internationals, such as Felix Magath, Manfred Kaltz, Dietmar Jakobs and Wolfgang Rolff.
They had received a bye in the First Round, as they were the defending Champions and this was their first entry in the Competition.

The first leg, on October 19th, was played at Bucharest’ Stadionul 23 August.
Dinamo scored their first two goals by two defensive errors by goalkeeper Stein and Kaltz.
By then Allan Hansen had already replaced Michael Schroeder after an injury.
Augustin and Multescu scored the first two goals.

In the 29th minute, Stein gave away a corner which was taken from the right side, it quickly arrived to Augustin on the six yard line and he headed home.

Gheorge Multescu scored a beautiful long distance shot that Stein was unable to save in the 62nd minute.

With less than 10 minutes left, Kaltz made a bad pass in Dinamo’s half of the field that was intercepted and Orac went through three defenders to score.

Many bottles were thrown on the field by Romanian fans, at one point Happel even started to complain to the Referee about it, which caused a delay of three minutes.

Happel declared that Schatzschneider should have scored twice before Dinamo scored their first goal. He added that the Referee should have awarded a penalty kick after a foul on Rollf. Despite the heavy loss, he expressed confidence that the team could overturn the score with Wuttke back on a striker.
Even though, it was a heavy loss, many in Hamburg still believed that they could overturn it at home.

The second leg, on November 2nd, was played at Hamburg’s Volksparkstadion.
For Hamburg, Wehmeyer and Wuttke were in the team replacing Schroeder and Milewski from the First Leg. For Dinamo, Stanescu and Movila started in place of Augustin and Talnar from the First Leg.
SV Hamburg had to win by more than three goal margin and they attacked from the start.  They were rewarded just before halftime, when Dietmar Jakobs scored from a header after a corner from the right taken by Wehmeyer.
They scored two more goals midway through the second half.
In the 56th minute, Felix Magath took a free kick from the left side that was headed down into the net by Dietmar Jakobs for his second goal of the evening. Moraru attempted to save it, but the ball rolled under him and crossed the line.
Seven Minutes later, Hartwig took a throw-in from the right side, that reached the goalmouth untouched despite players trying to reach it and substitute Thomas von Heesen who had only replaced Kaltz minutes earlier scored Hamburg’s third from close range.
At this point it appeared that Hamburg might just be able to score the deciding fourth goal.
Despite Pressure, Hamburg were not able to breach Dinamo’s defense anymore.
In the 77th minute, Schatzschneider missed an opportunity to score the fourth goal after a cross by von Heesen. 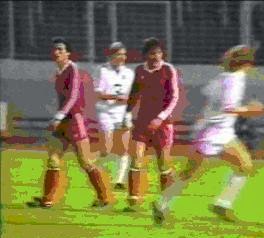 With four minutes remaining, on a breakaway , the ball reached on the left side to Talnar who went across the goalmouth and took a low shot to the right of Stein.
This dealt a killer blow to Hamburg’s hopes of qualifying.
With Hamburg lost and resigned, Dinamo scored another a minute before the end of the match by Multescu on another breakaway.

After the match the Hamburg contingent could not hide their disappointment for conceding two late goals. Magath stated that ‘we have defeated ourselves’, while Happel stated that ‘in forty years of Football, I had never seen anything like that’.
The scapegoats were the two new recruits (Schatzschneider and Wuttke) and by extension Gunter Nezter (SV Hamburg’s General Manager) who had recruited them to replace Hrubesch and Bastrup. They were considered by many to be sub standard replacements.

Dinamo Bucharest went on to defeat Dinamo Minsk in the Quarterfinals, but were eliminated by eventual winners Liverpool in the semifinals.
SV Hamburg finished runners-up to Stuttgart in the Bundesliga and have not regained their prominence since. In a way this match precipitated Hamburg’s decline.