1- Event:
Michel Platini’s injury and absence from the French national team in the spring of 1981.

Consequence:
Platini was France’s playmaker in the midfield. His absence allowed France manager Michel Hidalgo to include Bordeaux’s Alain Giresse whose National team prospects seemed to have passed him by.
After Platini’s return instead of excluding Giresse, Hidalgo decided to include them both and was able to create one of the best midfields in Europe of the 1980s that led to a European Championship title (1984) and two World Cup Semifinals (1982 and 1986).

Consequence:
His assistant, a then unknown Louis van Gaal was promoted as new coach.
Van Gaal ,who had never been head coach anywhere, started to implement his own ideas and slowly built a young team that would triumph in the 1995 Champions League that included many young stars such as Patrick Kluivert.
His success with Ajax led to future positions at Barcelona, Bayern Munich as well as two stints (Including now) as Holland’s National team manager.

3- Event:
Argentina goalkeeper Nery Pumpido being injured after a collision with teammate Julio Olarticoechea during the World Cup match vs. USSR on June 13, 1990.

Consequence:
Usual goalkeeper back-up Luis Islas was dropped from the squad prior to Final selections as he did not want to be understudy.
Sergio Goycoechea was promoted to understudy and in the 11th minute of the USSR match replaced Pumpido.
Goycoechea, who had expected to see no action during the World Cup, went on to become one of the stars and revelations of the tournament.
He was the hero on penalty kick shoot-out wins vs. Yugoslavia and Italy by saving penalties in both matches and helping Argentina to get all the way to the Final.

4- Event:
Eric Cantona’s disciplinary panel hearing while a player with Nimes in fall of 1991.

Consequence:
On December 11, 1991, Eric Cantona’s domestic suspension was increased from 4 matches to 2 months after he insulted the disciplinary panel.
The next day, he announced his retirement from the game in anger.
As a result, he went on trial to play in the English First Division.
He had a trial with Sheffield Wednesday , but he finally signed with Leeds United.
He triumphed in the League with Leeds that season and midway in the following season joined Manchester United and the rest is EPL history.

Consequence:
Following Toshack’s dismissal in-house Real Madrid man Vicente del Bosque was appointed as caretaker Real Madrid manager.
He had similarly stepped in when Benito Floro was sacked in 1994.
His caretaker position soon became a full time position as he led Real Madrid to Champions League triumph that season.
He held on to the position until 2003 and won another Champions League title and two League titles.
Because of his Real Madrid successes he was eventually appointed as Spain manager in 2008.
He went on to lead the Spain national team to a World Cup (2010) and European Championship (2012) triumphs.

New Addition: Transfers that did not happen, Part one

1-Following the 1990 World Cup, newly promoted Serie A club Parma were very keen in acquiring West Germany’s Guido Buchwald.
The player himself was willing, however, his club Stuttgart categorically refused as he was irreplaceable in their eyes.
As a result Parma acquired Anderlecht and Belgium defender Georges Grun.

2- Prior to signing for Olympique Marseille in the summer of 1986, French striker Jean-Pierre Papin was on the verge of joining AS Monaco from Club Brugge.
However, OM President Bernard Tapie persuaded Papin to come to Marseille.

3- German striker Jurgen Klinnsman almost joined Real Madrid in the summer of 1992.
Klinnsman was to leave Italian club Internazionale Milano and had agreed with Real Madrid’s Dutch Manager Leo Beenhakker to join Real.
However, after Beenhakker was dismissed following Real’s defeat in the League title race and Copa del Rey Final, the deal was cancelled.
Real instead signed Chilean Ivan Zamorano from Sevilla and Klinnsman joined France’s AS Monaco.

5-During the 1987/88 season, Internazionale Milano acquired, from Porto, Algeria’s Rabah Madjer for the following season.
However, Inter pulled out of the agreement due to the fear that Madjer was injury prone.
They signed Argentinean striker Ramon Diaz instead from Fiorentina.

WS Magazine Issue: April 1967
Article Title(s): ‘Are reserves at all Necessary’
-Discussing the necessity of substitutions

The best books about the History of the German National Team.

These are the books I have chosen is:

This book has every National team lineup with the relevant dates and information from 1908 to the Confederations Cup of 2005.
The information includes both West and East Germany and unified.
There is brief description of many of the matches, though not every match.
There are many archival photographs in black and white and color.
At the end there’s an index of all German National team players (East and West)

This book has in depth descriptions of every match played by West Germany from 1908 to May 31, 1989.
Full statistical information is given about each match, with dates, team’s lineups, players club information, etc.
The archival photographs are in black and white.
At the end there’s an index of all German (West) National team players

This is not a statistical book about matches and results.
This book has a brief biography of every German national Team player with some photographs.

This is also not a statistical book about matches and results.
This is a written history of the German national team with archival Black and White photographs.

This book contains all East Germany national team lineups.
Full statistical information is given about each match, with dates, team’s lineups, etc, with a brief description of the match.
At the end there’s an index of all East German National team players

Kicker published a special Edition in 2005 about the History of the German National team.
With Write ups , interviews, archival Photographs (Black and White and color) and all the relevant statistical information.

This book deals exclusively with the unique history and the matches between England and Germany National teams with archivals photographs.

If any one knows of other books pertaining to this topic, please do not hesitate to leave a post.

Articles on Teams and Events-Part 23

SV Hamburg and Real Sociedad were paired in the Semi Finals of the Champions Cup in April of 1983.
The Spanish were having an average season after having won the Spanish La Liga title in the previous two seasons (1981 and 1982).
Alberto Ormaetxea managed the all-Basque team since 1978.
Captain and goalkeeper Luis Arconada and other National team players that had represented Spain in the 1982 World Cup, such as Jesus Zamora, Jesus Satrustegui and Luis Lopez Ufarte, led the team
They had not signed any key new player; they had lost influential International midfielder Pericho Alonso, father of current International Xabi, in the off-season to Barcelona.
They had eliminated Vikingur Reykjavik, Celtic Glasgow and Sporting Lisbon in the previous rounds.

Defending Bundesliga Champions SV Hamburg, managed by Austrian Ernst Happel since 1981, were on the verge of having their greatest ever season.
They had in the off-season lost Franz Beckenbauer to retirement and Caspar Memmering to French club Bordeaux.
Its key acquisition was Fortuna Koln’s midfielder Wolfgang Rolff, who went on to become a full International. 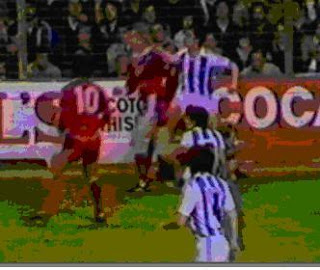 Denmark’s Allan Hansen also joined, though he failed to make a breakthrough and was seldom used.
The side still contained Captain and striker Horst Hrubesch and other West German Internationals such as Manfred Kaltz, Felix Magath, Dietmar Jakobs as well as Danish striker Lars Bastrup. 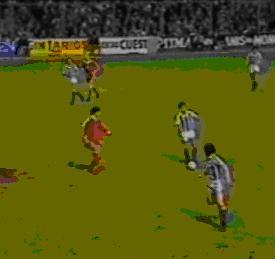 Hamburg had eliminated Dinamo Berlin, Olympiakos and the mighty Dinamo Kiev in the previous rounds.

The first leg, on April 6th, was played in San Sebastian’s Atocha Stadium.
Real Sociedad had to contend with many injuries most notably Jesus Satrustegui and Ignacio Okortabarria, while Jesus Zamora was off -form after a disappointing World Cup

Sociedad Manager Ormatxea had stated that due to the state of their injuries that season reaching the Final would have been a miracle.
Hamburg was still undefeated away from home in the competition and was a stronger and better-organized squad.

Hamburg dominated most of the match and scored through a header from Rollf in the 58th minute from a cross on the right from Hartwig.

Sociedad equalized in the 74th minute after a corner was not cleared by the Hamburg defense and Gajate tapped in from close range.

Hrubesch had a header that hit the post in the last minute.
Hamburg played with such confidence that the opposing fans applauded them at the end of the match.

The second leg, on April 20, was played in Hamburg’s Volsksparkstadion.
On the days leading up to the match, Horst Hrubesch had revealed that he would be leaving Hamburg for Standard Liege at the end of the season.
Hamburg started with a more attacking formation. Thomas von Heesen joined in the attack with Hieronymus out and Groh in defense.

For Sociedad gone were goalscorer Agustin Gajate, as well as Jose Maria Bakero and Jesus Zamora to be replaced with Eliseo Murillo, Julio Olaizola and Tomas Orbegozo in the starting lineup.

Sociedad were still missing Jesus Satrustegui and Ignacio Okortabarria.
Sociedad adopted a defensive formation and Hamburg was only able to score with 15 minutes remaining through Jakobs header from a Kaltz corner from the right.

Sociedad tied 4 minutes later after a long punt by Arconada reached Bakero who crossed from the right to Diego Alvarez who scored.

Just before the end, another corner from the right by Kaltz was sent to Magath at the edge of the box who blasted it so hard that Arconada could only parry and von Heesen picked up the rebound from close range.
﻿﻿﻿﻿﻿The goal seemed suspiciously offside, however, the result was well deserved.

Hartwig received his second yellow card and thus became ineligible for the Final.
Hamburg went on to defeat Juventus in the Final in Athens on May 25, 1983 with a  goal from Magath to record their best season in their history.
Sociedad finished seventh in the League and has never reached the same heights apart from a few European Qualifications along the way.