1-Germany’s Jurgen Kohler and France’s Zinedine Zidane were both sent off in their last matches as professionals. Kohler was sent off for his club Borussia Dortmund in the 2002 UEFA Cup Final vs. Feyenoord.
Zidane was most infamously sent off for his head butt on Italian Materzazzi during the 2006 World Cup Final.

2-For 1982 World Cup Finals, West German manager Juup Derwall took 19 out of the authorized 22 players to Spain. The remaining three players (Holger Hieronymus, Stefan Engels and Thomas Allofs) stayed in Germany as stand-by.
Derwall had stated that why should he take players who knew would most likely not play and just be bored and depressed in their hotel rooms.

3- The 1987 English League Final, between Liverpool and Arsenal (won 2-1 by Arsenal), was the first time that Liverpool had lost a match that Ian Rush had scored in (he had joined Liverpool in 1980).

4-English club Nottingham Forest FC is the only previous Champions Cup winner to be playing now in lower divisions.
5-During 1986/87 season, FK Austria Vienna’s striker Toni Polster looked odds on favorite to Europe’s top goalscorer and win Adidas’ Golden Boot award. He scored 39 league goals that season.
However, in the closing weeks of the season Romanian Rodion Camataru of Dinamo Bucharest overtook him with 44 goals.
The manner that Camataru obtained the title seemed suspicious. He scored 24 goals in his last 12 matches and 12 goals in his last three matches.
Romania was then under Ceaucescu’s dictatorial regime and corruption was thought to be commonplace.
As a result Polster boycotted the awards ceremony at the end of the year due to the dubious nature of Camataru’s achievement.

-Match number 547 for Denmark and number 501 for Yugoslavia.

- Yugoslavia’s previous victory as well its previous match at Copenhagen was a World Cup Qualifier in the same stadium on September 9, 1981 that Yugoslavia won 2-1.
Yugoslavia player: Zlatko Vujovic was only player still remaining from that match.

-The previous match between the two nations was a 5-0 Denmark win on June 16, 1984 during the UEFA European Championships in Lyon, France.
Denmark players: Sivebaek and  Michael Laudrup and Yugoslavia players: Ivkovic, Katanec, Vujovic, Bazadarevic and Susic were the players still remaining from that match.


-The next match between the two nations would be the return leg of this UEFA European Championship tie in Belgrade on May 1, 1991 that Denmark won 2-1.
Denmark’s Schmeichel, Sivebaek, Kent Nielsen, Lars Olsen, Bartam, Jensen and Vilfort and Yugoslavia players: Ivkovic, Vulic, Jarni, Najdoski, Spasic, Hadzibegic, Jozic , Pancev and Bazdarevic were the players still remaining from that match.
Ilia Najdoski came on as a substitute in both matches.

-About eight months after this match, on June 23, 1991, former Yugoslav provinces of Slovenia and Croatia declared independence from Yugoslavia, which started the civil war.

-After the break-up of Yugoslavia, Katanec played for Slovenia, Jarni and Boban played for Croatia, Pancev and Najdoski played for FYR Macedonia. 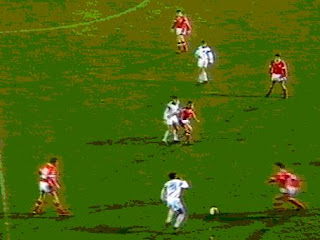 -Yugoslavia won its third straight match in this Euro qualifying group, they would go on to win 7 out of 8 matches, only losing the return fixture of this leg to Denmark.

-Yugoslavia would qualify from this group. However, due to the ongoing Civil War in Bosnia, UN sanctions were applied and just before the start of the tournament Yugoslavia was excluded from the Tournament Finals. Denmark replaced in them and went to win the title. 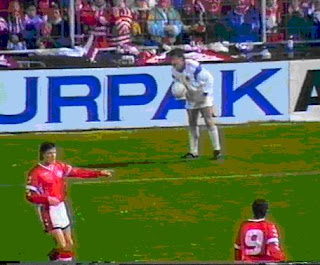 -Red Star players Pancev and Najdoski went on to win Champions Cup at the end of that season vs. Olympique Marseille of France.

- On November 20, 1990, Brothers Michael and Brian Laudrup and Jan Bartram withdrew themselves from further selection while Richard Moller-Nielsen is in charge.
Jan Bartram said he would like to make way for younger players.
Michael Laudrup said he no longer had any enthusiasm.
Brian Laudrup said he lacked respect for the manager.
All three would eventually come back; Bartram was the first to come back in the spring of 1991. Brian Laudrup returned by early 1992 and finally Michael Laudrup returned to the national team in the fall of 1993.
Michael Laudrup in interviews cited as one of his reasons, the defensive tactics of the new manager. Denmark had been playing an attractive, offensive game for a decade under previous manager the German Sepp Piontek.

-This was Denmark’s first home loss in an official tournament qualifier since the September 9, 1981 loss to Yugoslavia in Copenhagen. 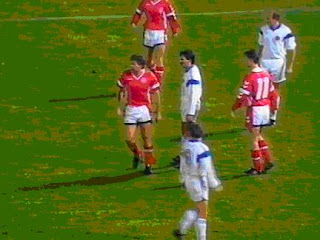 -Denmark’s Michael laudrup and Yugoslavia’s Pedrag Spasic both played for Spanish giants Real Madrid in their career. Denmark’s Fleming Povlsen was on their nursery team Castilla for one season.
Robert Jarni also played for Real Madrid but by then he was a Croatia international player.
Both Jarni and Michael Laudrup also represented Italian Club Juventus in their careers.

-Yugoslavia’s star Dragan Stojkovic missed this match through injury. He was injured shortly after joining Olympique Marseille and never really gained full fitness that season. He missed all of Yugoslavia’s matches for the season.

-Both Yugoslavia’s players Zvonimir Boban and Mehemt Bzdarevic had returned to national team duty that season after serving suspensions.
Mehmed Bzdarevic had spat on the referee during a World Cup Qualifier (October 11, 1989 vs. Norway 1-0) and on October 25, 1989, was banned for international football for one year.
On February 2, 1990, FIFA announced that Mehmet Bazdarevic was banned from the World Cup for spitting at referee in Norway match.
On May 24,1990, Zvonimir Boban was suspended for the Zagreb riot, where he had fought with policemen during the Yugoslavia Cup Final between Dinamo Zagreb and Red Star Belgrade. 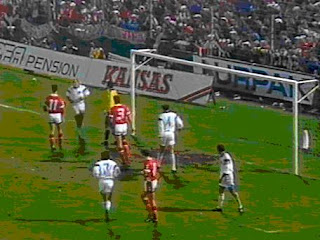 -Safet Susic assumed captaincy for Yugoslavia after Vujovic was substituted.

-On June 16, 1996 during the UEFA European Championships in Sheffield (Hillsborough Stadium), Croatia defeated Denmark 3-0.
Denamrk’s Schmeichel, Vilfort and brothers Michael and Brian Laudrup and now Croatia players Boban and Jarni played in that match.
Boban scored one of Croatia’s goals.

-Safet Susic is the current manager of Bosnia and Herzegovina.

-A month prior to this match on October 17, 1990, Croatia played its first match since World War II by defeating USA 2-1 in a friendly.
Zoran Vulic played in that match as well.
The Croatian Robert Prosinecki, the new star of Yugoslavia (Who was abscent for the Denmark match), had not taken part in that match, since Croatia was still not officially recognized by FIFA.

-Darko Panvcev was replaced in the 11th minute due to injury.

Another new feature that I will be doing on this blog is to go through my older magazines and scan player/coach interviews.
The interviews will be one in english and one in French, as I have mostly French/English magazines.
For the first interviews I have chosen:
A cross intervierw between then Barcelona manager Johan Cruyff and Athletic Bilbao manager, the German Juup Heyncks
(Magazine / Language : World Soccer, April 1993 / English)

1-When Paulo Roberto Falcao was named Brazil manager following the 1990 World Cup, he was initially forbidden by the Brazilian Federation to select any foreign-based player. The foreign-based players were seen as the scapegoats for the World Cup debacle.
2-French Captain Michel Platini signed a pre-contract with Italian Serie A club Internazionale FC Milano in 1980, when borders were still closed for foreign player transfers.
However, Inter chose not to exercise that option when the borders re-opened and Platini joined Juventus two years later.
3-PSV Eindhoven players Ronald Koeman, Hans Van Breukelen, Berry Van Aerle, Gerald Vanenburg and Wim Kieft won every tournament they participated in during the 1987/88 season.
With their club they won the Dutch League title, the Dutch Cup as well as the Champions Cup.
With the Dutch National Team, they won the UEFA Euro Championships.
4-Italian striker Alessandro Altobelli missed 3 penalty kicks with the national team in 1986.
He missed once during the World Cup vs. South Korea and then missed twice vs. Malta in December of that year. Incidentally, he scored from open play in both matches.
5-During the 1974 World Cup Final, between West Germany and Holland, German striker Gerd Muller scored a goal in the second half that was ruled offside. However, later Television replays showed that the goal was in fact valid.
Posted by sp1873 at 7:41 PM 4 comments: 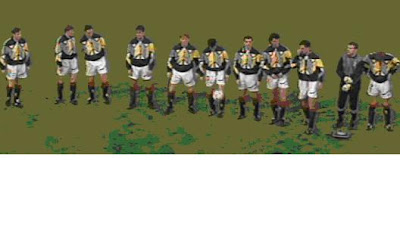 Notes:
-Match number 313 for Portugal and number 545 for Scotland.
-This was Scotland’s first match at Portugal since a World Cup Qualifier in the same stadium on November 18, 1981 that Portugal won 2-1.
Portugal player: Veloso was only player still remaining from that match.
-The previous match between the two nations was a 0-0 tie on October 14, 1992 World Cup Qualifier at Glasgow.
Portugal players: Baia, Couto, Veloso, Oceano, Semedo, Domingos and Futre and Scotland players: Goram, McCall, Levein, Gallacher, McStay, Mc Coist, Collins and Durrant were the players still remaining from that match.
Scotland’s McClair also played in that match, though for this match he was an unused substitute.

-Scotland has never won in Portugal since the first match between the nations on May 21, 1950 (2-2 tie).
-Scotland’s previous victory over Portugal was a 4-1 win in a UEFA European Championship Qualifier on March 26, 1980 at Glasgow.
-The next match between the two nations would be on a friendly on November 20, 2002.
The match ended in a 2-0 win for Portugal.
Portugal’s Couto and Rui Costa were the only players still remaining from that match.
-Switzerland and Italy qualified from this World Cup Qualifying Group.
-Kevin Gallacher scored a goal that was ruled offside in the 24th minute.
-Scotland’s Eion Jess missed this match with a broken ankle.
-Portugal’s only foreign-based players were Barros and Oceano. Scotland’s players were all British based.
-Ally Mc Coist was carried off in the 83rd minute with a fractured leg. Scotland having already made both its substitutions was forced to play with ten men.
-This was Scotland’s worst defeat since losing to England 0-5 in 1973 and 3-9 in 1961.
This was Scotland’s worst defeat vs. non-British opposition since losing 0-7 to Uruguay during the 1954 World Cup. 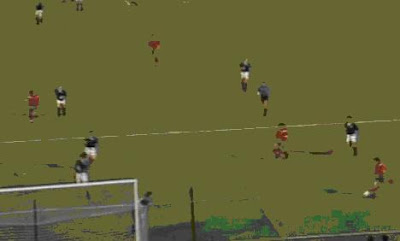 -Craig Levein is the current manager of Scottish national team.
Ally McCoist is the current manager of Rangers FC Glasgow.
-At the post-match analysis, Scotland manager Roxburgh said  'a team died out there!'
- Portugal captain João Domingos Silva Pinto  missed this match through injury, Paulo Futre skippered in his place.
-Sandor Puhl, the referee of this match, refereed the World Cup Final match between Brazil and Italy the following year. 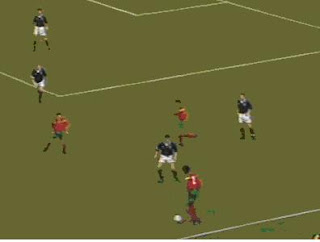 -This defeat essentially sealed Scotland’s fate in this group, as well as, Scotland manager Andy Roxburgh’s. He resigned before the end of the year on September 13, 1993, a few days after a 1-1 tie with Switzerland. He had been in charge since after the 1986 World Cup. His assistant Craig Brown replaced him.
-Scotland Captain Richard Gough quit the Scotland team in disgust after a bitter dispute with the manager over the tactics for the game.
He ended his national team career after 10 years after this match.
He claimed Scotland’s tactics for this match were decided following a conversation the coaching staff had with a Lisbon taxi driver.
In an interview with “Herald Scotland” on March 25, 2011, Gough regretted his decision to quit and stated that he should have carried on playing.
-Scotland failed to qualify for a World Cup for the first time since 1970. They had qualified for the past five World Cups.
-Portugal’s Jorge Cadete played at Celtic FC Glasgow from April 1996 to 1997. He also played at Patrick Thistle FC  in 2004. 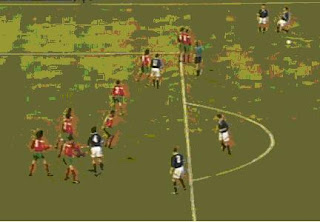