1-Dutchman Ronald Koeman has played for all three big clubs in Holland (Ajax, PSV Eindhoven, Feyenoord).
With his current appointment as Feyenood manager, he has also managed all these three clubs.

2-In an interview, Andrei Shevchenko claimed that his manager at Dinamo Kiev, Valeri Lobanovsky, once forced him to train while he was clearly flu/fever stricken to make a statement that he does not show favoritism to anyone.

3-Current Manchester City manager, the Italian Roberto Mancini was axed from the Italian National team in 1984 after manager Enzo Bearzot caught him break curfew, while the national team was touring North America to play vs. USA and Canada.
He vowed that he would never select him while he was still in charge and kept his word.
Mancini was recalled to the national team after Bearzot’s retirement and Azeglio Vicini’s appointment as national team manager in 1986.

4-Italy and Lazio defender Luciano Re Cecconi was killed on January 18, 1977  aged 28 due to a prank gone wrong.
He and a friend went to a jewerely store and pretended they had guns and they were robbing the owner.
The owner unknowingly pulled a gun and shot him.

-Match number 427 for Holland and number 451 for Belgium.

-This was the 115th meeting between the nations.

-The next match between the two nations, as well the next in Rotterdam, would be a friendly in the same stadium on September 9, 1987 that ended in a 0-0 tie.
Holland’s van Breukelen, van Tiggelen and Rijkaard and Belgium players: Pfaff, Gerets, Grun, Clijsters, Vercauteren, Frank van der Elst, Desmet , Ceulemans, de Wolf and Veyt were the players still remaining from that match.

-The previous World Cup qualifier between the nations in the same stadium was on October 14, 1981 and a 3-0 dutch victory.
Holland’s van Breukelen, van de Korput and Wijnestekers and Belgium players: Pfaff, Gerets, Vercauteren, Vandereycken and De Groote were the players still remaining from that match. 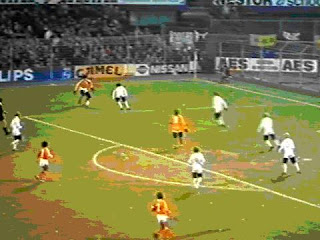 -Franck Vercauteren and Frank Rijkaard went on to manage their respective national teams.

-As pointed on previous postings Belgian manager Guy Thys and Belgian defender Leo Clijsters have both passed away since.

-Belgium qualified for the World Cup in Mexico due to the away goals rule.

-Holland failed to qualify for the World Cup for the second straight time.

-Dutch striker Wim Kieft was suspended for this match as he was sent of in the October 16, 1985 match for hitting Vercauteren in the throat In the 4th minute.

-Dutch striker Marco van Basten was suspended from next match due to yellow cards accumulation. 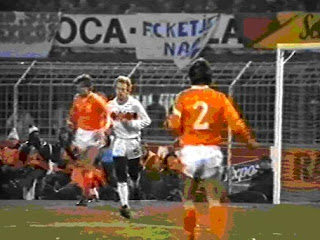 -Belgium Player Gerard Plessers was suspended for this match.

-Former Belgian International Ludo Coeck was killed in a car accident on October 9, 1985. His BMW ploughed into crash barriers near the Belgian town of Rumst, while he was on his way to sign for Lierse.
He was born on September 25, 1955, he was 30 years old.

-In the fall of 1985, Belgium defender Eric Gerets earned recall to the national team back from suspension. Though he was stripped of the captaincy for good.
He was suspended for over a year for his role in the Standard-Watershei bribery scandal.

-Dutchmen and Feyenoord players Wijnestekers, Tahama and Hiele were playing in their club’s home stadium.

-This was Hugo Broos’ first match for Belgium since 1979.

-This was Belgian players Daniel Veyt and Phillipe Desmet’s first match for Belgium. Both were Waregem players.-

-Dutchman Willy van de Kerkhof announced his international retirement after Holland failed to qualify for Mexico.
He was the last player from the 70s glory years to be still in the national team set up.

-Holland manager Leo Beenhakker was interim Coach while Rinus Michels was recovering from surgery.
He also managed Holland during the 1990 World Cup; he has also managed the Polish National team.

-This was John van Loen’s first match for the Dutch national team.

-Dutchman van Loen and van Tiggelen went on to play in the Belgian league for Anderlecht.

-This was Dutch defender Ben Wijnestekers last match for Holland.

-Belgium’s Pfaff and the Dutch van de Korput were both players in the West German Bundesliga.

- The Dutch van de Korput and unused Belgian substitute Enzo Scifo were past and future players for Italian Serie A club Torino.

2-During the 1978 World Cup match between Italy and Hungary on June 6, 1978 (Italy 3-Hungary 1), Italian Roberto Bettega hit the post 3 times.
He did score once in the match.

3- The 1996 UEFA European Championships was the first Tournament that Italy took part in with not a single Internazionale FC Milano player in the squad.

5- During the summer of 1995, Italian Serie A club Lazio had agreed to sell their striker Giuseppe Signori to AC Parma for a significant sum.
However, after Lazio fans protested violently the deal was cancelled.

-Match number 462 for Belgium and number 225 for Republic of Ireland.

-This was the eleventh meeting between the nations.

- Republic of Ireland’s previous match at Brussels, as well as the previous match between the nations, was a World Cup Qualifier in the same stadium on March 25, 1981 that Belgium won 1-0.
Belgium players: Vercauteren and Ceuelemans and Republic of Ireland players: Langan, Moran, Hughton, Brady and Stapelton were the players still remaining from that match.
Belgian Erwin Vandenbergh who remained on the bench in this match played in the 1981 match.

-The next match between the two nations would be the return leg of this UEFA European Championship tie in Belgrade on April 29, 1987 that ended in a 0-0 tie at Dublin’s Lansdowne Road
Belgium’s Pfaff, Grun, Clijsters, Vervoort, Vercauteren, Scifo, Claesen, Desmet and Ceulemans and Republic of Ireland players: Bonner, Moran, Houghton, McGrath, Brady, Galvin, Whelan , Stapelton and Aldridge were the players still remaining from that match.

-The next match at Brussels as well as the next time Belgium would win would be a World Cup Qualifier on November 15, 1997 (2-1 Belgium win).
Belgium’s Vander Elst and Republic of Ireland ‘s Houghton were the only players still remaining from that match.

-Ireland were awarded their penalty kick after Stapelton was fouled by Pfaff in the box.
Later Stapelton admitted that the penalty should not have been awarded.

-This was the first official match of Republic of Ireland with Englishman Jacky Charlton as amnager.

-Belgium had just finished fourth in the 1986 World Cup in Mexico and this was their first match since the World Cup.

-Every Irish player was based outside of Ireland. All were british based except Brady who played in Italy for Ascoli.
Belgium’s foreign based players were Pfaff, Desmet, Vandenbergh and Claesen.

-Belgium’s Nico Claesen played in the English League for Tottenham Hotspur. He was teammates with Ireland’s Hughton and Galvin.

-Arsenal defender David O’Leary had been axed from the Ireland squad by Charlton because of his refusal to participate in the Iceland tournament at the end of 1986 season due to a previously scheduled family holiday. He would apologize  and be back in the squad by fall of 1988.

-Franck Vercauteren managed Belgium from May 2009 to end of September 2009. 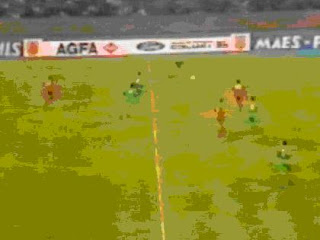 -Belgian defender Leo Clijsters (born November 9, 1956) passed away on January 4, 2009 at age 52, due to lung cancer. He was the father of Tennis players Kim and Elke. 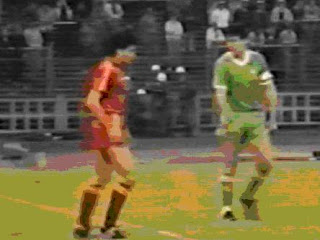 -Ireland under Jacky Charlton had accepted the grand-parent rule as a criteria for selection eligibility. As a result Englishman John Aldridge and Scottish Ray Houghton were eligible for selection for Ireland.
John Aldridge, in a conversation with club teammate at Oxford David Langan, had mentioned that his grandmother was from Athlone and had moved to England.
Aldridge in return told Charlton about Houghton, whose father was from Donegal. 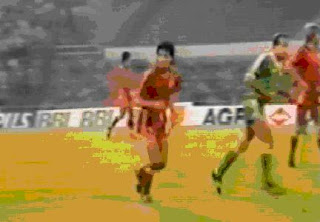 -The match was played at Brussels’ Heysel Stadium, where over a year earlier, the ill-fated Champions Cup Final between Juventus and Liverpool took place.
Lawrenson , Whelan and Beglin were part of that Liverpool squad.
This was the first competetive match at Heysel since that day.

The Boys in Green