Articles on Teams and Events-Part 20

Articles about soccer in USSR

Ajax Amsterdam and Olympique de Marseille were paired in the Semi Finals of the Cup Winners Cup in 1988.
Bernard Tapie’s big spending OM had finished runners-up in the League the previous season and qualified for the tournament after losing to double winners Bordeaux in the Cup Final.
OM had acquired West German striker Klaus Allofs that season to partner star striker Jean-Pierre Papin in the attack.
Other new arrivals included Ghanaian Abedi Pele from Niort, defenders William Ayache and Claude Lowitz from Paris St Germain and Yvon Le Roux from Nantes.
Despite all the new quality signings they were having a modest season in the League but had done well in Europe by eliminating last season’s losing Finalist East Germany’s Lokomotiv Leipzig and also Yugoslavia’s Hajduk Split.
Defending Cup Winners Cup Champions Ajax was having a difficult season.
Marco van Basten had left for AC Milan at the end of the previous season.
Their manager Johann Cruyff and Captain Franck Rijkaard had both left in anger during the season.

In addition the acquisition of Republic of Ireland striker Franck Stapelton from Manchester United had been disappointing and had transferred back to England.
Luckily the midseason purchase of IFK Gothenburg’s Swedish defender Peter Larsson had been a success.

They still had not conceded a goal during the Cup Winners Cup competition.
They were lagging behind runaway leaders PSV Eindhoven in the League and had only this competition to save a poor season.

Ajax was playing in their general first team formation.
Ajax playing in Blue completely dominated and outplayed Marseille in every department.
In the 11th min, John van’t Schip after receiving a ball lost by Lowitz crosses for Witschge to head home.

Just before halftime, in the 41st minute, Danny Blind crosses a ball that Bosman allows to go pass him for van’t Schip to score.

Substitute and future superstar Dennis Bergkamp scored the third goal just before the end picking up the ball in his own half and running all the way to the opposite goal to score.

The second leg, on April 20th, was played in Ajax’s De Meer Stadium.
The score in the first leg made this tie a mere formality for Ajax, who were content to hold onto their lead and not to over exert themselves.
They started with the same lineup as the first leg.

OM virtually eliminated also had to contend with many injuries.
Goalkeeper and Captain Bell was out injured and was replaced in the lineup by Henri Stambouli and Papin skippered in his place. 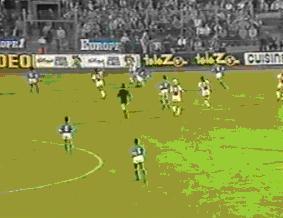 Ajax scored first in the 22nd minute after a cross by van’t Schip enabled Peter Larsson to stab home.
Marseille tied it up on the 65th minute when Papin scored on a breakaway from a one on one situation with Menzo. This was the first goal that Ajax had conceded in the competition that season. 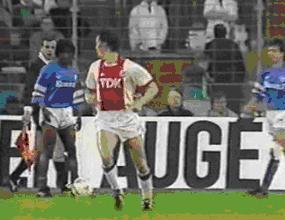 Klaus Allofs scored Marseille’s winner in the last minute from a long-range free kick.
This was a consolation win for OM to save some pride, but the outcome of the tie was never in doubt. 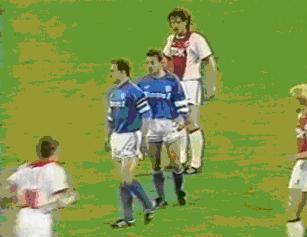 Ajax qualified for the Final for the second year running but lost to Belgium’s Mechelen that was managed by Aad De Mos (one of their former managers). 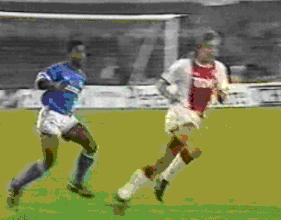