Name: Franco Spicciariello, PhD
Twitter: @frankspicc
Personal Description: I work on public policy in the tech sector, covering several European countries. In the past, I have been a lot into soccer. I covered US soccer on Guerin Sportivo from 2006 to 2016 and I woked for the US group that took over AS Roma (but I’m a diehard Lazio fan ).

Response: I was born in November 1972. My first memories about soccer go back to the 1978 World Cup. I can remember sitting on the couch with my Dad to watch the Azzuri beating Argentina. Then my first game at Stadio Olimpico, in October 1978: Lazio vs Juventus 2-2. I started reading about football in those times. 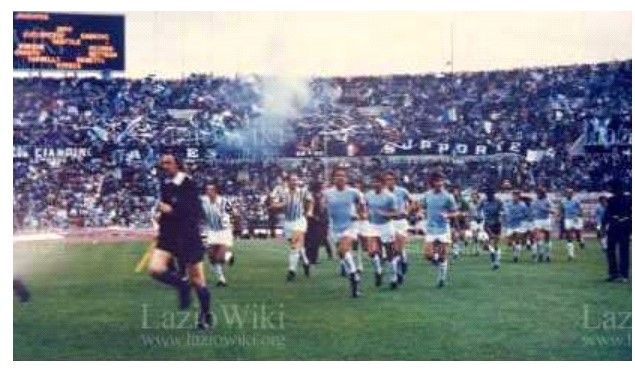 Soccernostalgia/@1888Letter Question: What was the first Soccer (Football) magazine that you read as a new young fan of the game? (Personally I like ’Guerin Sportivo’ for its format and photos)

Response: In my house, there was always the sport daily Corriere dello Sport, but I started having my dad buying me regularly the weekly Guerin Sportivo in 1979. I still have some copies.

Response: A side from Corriere dello Sport, I used to read “Intrepido”, which was a weekly with a lot of football (weekly recaps, interviews, photos) and comics. Then SuperGol came in 1984. It was a monthly magazine, with great graphics, quite similar to Mondial and Onze, but with a more 80s glamour. 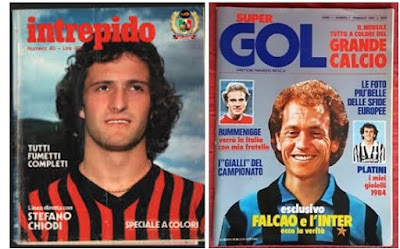 Response: Guerin Sportivo (the world’s most ancient sport magazine) today is a monthly magazine dedicated only to soccer. At the time it was a weekly (until end of 2009) in which you could find everything: the weekly recap, commentaries with the capacity to push the football federations to change its policies (i.e. the reopening to the foreign players in 1980), articles and photos about the other championships (England, Germany, Spain, Netherlands, US’ NASL, etc.), all the scores and the tables. Furthermore, wonderful interviews with champions we could only dream about: I recall Keegan, Zico, Cruyff, Maradona when he was still in Argentina, etc.
Intrepido was more about the focus on one Italian player/team per week, plus a general recap of what was going on in Serie A, and sometimes Serie B. SuperGol was flashy, with also a lot of interviews and talks about the players’ transfers.

Soccernostalgia/@1888Letter Question: Was the coverage of Football mainly local Italian Serie A or was International Football news covered as well in a meaningful way?

Response: Serie A was absolutely central, also considering that starting from 1984/85 I would say it became the world’s top soccer league, and stayed like this for 20 years. Every top player came or wanted to come to Italy. The international coverage increased a lot around the UEFA matches.

Response: A side of Guerin Sportivo, Intrepido e SuperGol, we had, and still have, three daily sport newspapers (Gazzetta dello Sport, Corriere dello Sport, Tuttosport), plus the sport pages (almost soccer only). Furthermore, there were some Serie A team’s magazine: Forza Milan, Hurrà Juventus, La Lazio (my father was the publisher ), La Roma, Inter. Plenty of choice!

Response: Not really. I remember going to the newsstands in the center of Rome, but I could only start finding “France Football” and “World Soccer” starting from the early 90s.

Response: I can still feel the excitement when I went to newspaper store every Wednesday, the day Guerin Sportivo was out. Or every day during the summer to read the news about the transfers, discovering which team got which player. Even today, there is the digital version but I still prefer buying the paper. The sensation is totally different. I used to keep reading my Guerin Sportivo several times, especially during the summer when they skipped a number in August. I still have a 1981 copy with Arie Haan on the front-page (it seemed he signed for Napoli) and with John Wark who just won the Bravo Trophy while playing for Ipswich Town: I remember bringing it with me on my first vacation alone on the mountains close to Rome. 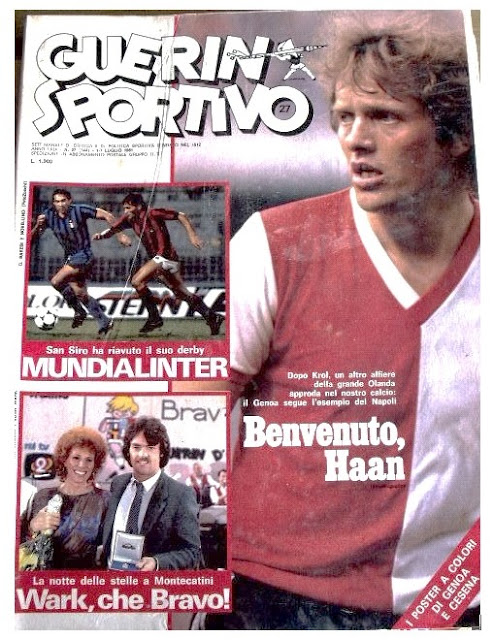 Response: I would say both. Today we give it for granted and immediate, but across 1980 we did not have any other source to know what’s going on in the other countries, and I really “studied” those pages. The writing at the time made me understand several things, giving me a great view of what was really going in the Italian soccer world.

Response: Guerin Sportivo got better and better in terms of graphics. In the 80s it also covered the other sports and even some music. The journalists were some of the cream of the Italian media, and in part still are. Sure, the competition of the internet changed several things, and the expectations cannot be the same. Once the Guerin Sportivo editor told me that now its biggest competitor is the daily Gazzetta dello Sport. The difference was that in the past Guerin had in depth interviews and articles, while Gazzetta focused on the daily news. Now, with the news available immediately, Gazzetta moved on a different territory and killed part of Guerin Sportivo readership, being also owned by a powerful publisher.

Response: For sure the time between 1980 and 1990, following the arrival of the foreign players, the victory in the 1982 World Cup and the boom of Italian Serie A.

Soccernostalgia/@1888Letter Question: As an Italian, the daily newspapers, ‘La Gazzetta dello Sport’, ‘Corriere dello Sport’ and ‘Tuttosport’, etc play a big part in the coverage of the game. Can you compare these daily papers compared to a magazine like ‘Guerin Sportivo’?

Response: Guerin Sportivo is now owned by the same publisher of Corriere dello Sport, and shares the same Director. Therefore, it seems to me it has lost some of its peculiarities, and some of its capacity to be influential both nationally and internationally (I don’t know why it does not the Bravo Trophy for the best UEFA Cups’ U21), but it’s still a great magazine.

Soccernostalgia/@1888Letter Question: I had been aware of ‘Guerin Sportivo’ for years, in the late 90s, a new monthly magazine ‘Calcio2000’ came onto the scene. Despite not being able to read Italian, I found it impressive in its format? Can you describe this magazine and its evolution?

Response: I bought Calcio 2000 for a while since its first issue. There was space in the market in a time – the end of the 90s - in which Serie A was great, with 6 teams (Juve, Milan, Lazio, asroma, Inter, Parma and Fiorentina), the “six sisters”, were battling for the Scudetto. Great graphics, but - with all due respect - the level of writing and coverage was not even close to the bar set by Guerin Sportivo. I cannot remember any scoop, news, of debate started by Calcio 2000. To me, it sometimes looked disconnected from what was going on in the soccer world. But I have to say that I enjoyed it once in a while.

Response: I still buy and love Guerin Sportivo. But, also thanks to my travelling, I appreciate several foreign soccer magazines and dailies: FourFourTwo (the best, IMHO), World Soccer, France Football, So Foot, Onze, Marca and AS, Voetbal.

Response: It was fine. Sure I missed not having access to the foreign magazines. I remember when a family friend brought me a copy of El Grafico with Maradona in a Napoli kit. My heart started to beat for the emotion, and I kept it for more than 20 years.

Response: Still interested, but sure I have a lot more knowledge of what’s going on.

Response: Guerin Sportivo moved to monthly 10 years ago. SuperGol lasted a few years, while Intrepido shut down in 1998 after more than 50 years.

Response: No way! I want the paper!

Response: No, thank you for the great stuff you share on a daily basis on Soccer Nostalgia!

Note: If anyone is interested to particpate in this project, please do not hesitate to contact either of us at @sp1873 and @1888letter.
You may also contact us via our blogs, email (sp1873@aol.com in my case) or Facebook in my case.

When one becomes a serious Soccer (Football) fan, the next step in the evolution is to read about in print in sports or exclusively soccer magazines. Many of us have memories of reading these magazines to not only keep up with the scores and league tables but eventually to learn about the game and the personalities beyond just the scores and learn of tactics, history, culture, etc.
For many of us reading these magazines opened up a new world as we learned of new nations, cities, styles and everything in between.
In collaboration with @1888letter we aim to bring some of these personal stories from people from different nations but common in their love of the game and their experience via the medium of the game in print.
This project will give us an insight as we will see similarities and differences in Football readership and the history of it in different nations.

In the decades before the Internet and global TV coverage, football magazines were a lifeline for the young fan, providing a regular source of information about the game not only nationally, but worldwide. Everywhere football was played, magazines brought an insight into games, players, competitions and teams, with facts, photographs and analysis. Several of these sports titles – from El Gráfico, France Football, La Gazzetta dello Sport, and Kicker, to the UK’s own weeklies, Match and Shoot! – became known beyond their own country. Many more magazines existed, for shorter or longer periods of time, in every nation. Whether famous or obscure, we wanted to bring their history to life with this project of personal memories, thoughts and stories. Through the experiences of collectors, fans and readers, we hope to celebrate these magazines, and explore the legacy of football in print for fans around the world.
https://the1888letter.com/football-magazines-a-collaborative-project/ 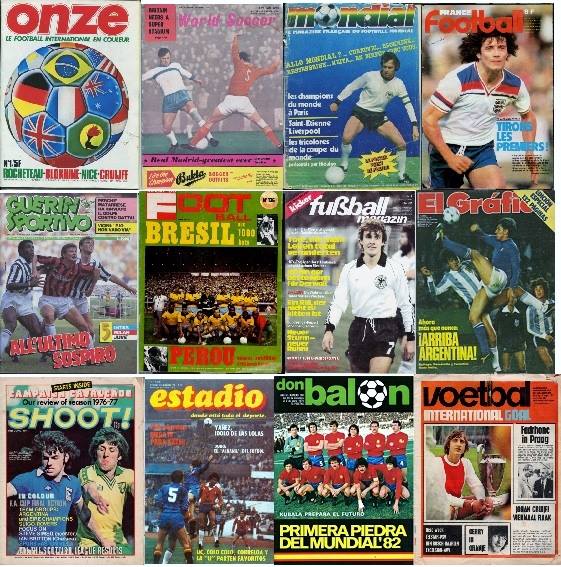 The South American qualifiers concluded with Brazil and Peru qualifying to the World Cup next year.
Argentina continued with its friendlies against European guests.