Articles on Teams and Events-Part 21

Real Madrid and Napoli were paired in the First Round of the Champions Cup in 1987.
The Diego Maradona inspired Napoli had just won the Italian Serie A title for the first time in their history.
Managed by Ottavio Bianchi, they had strengthened their offense with the purchase of Brazilian striker Careca from Sao Paulo and its defense by acquiring outside back Giovanni Francini from Torino.
Real Madrid, managed by Dutchman Leo Beenhakker, had added a few players to its already star studded squad.
Former Valencia and Spain International defender Miguel Tendillo had arrived after a solitary season at Murcia and striker Francisco Llorente (nephew of Paco Gento) had arrived from Atletico Madrid.
Yugoslav midfielder Milan Jankovic had replaced Hepatitis stricken Jorge Valdano, as one of Real’s foreign players, midway through the previous season.

The first leg, on September 16, was played in Madrid’s Santiago Bernabeu Stadium.
As punishment for crowd trouble vs. Bayern Munich, the previous season on April 22nd, UEFA had banned any fans for Real’s home match. 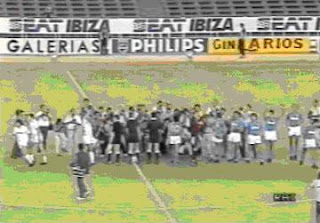 In the empty stadium, there were 204 print journalists, 70 radio journalists and 24 Television journalists for a total of 298.
Initially Spanish Television (TVE) had not wanted to broadcast the match but was forced due to pressure from the Government and even the King.
Italian National Team Manager Azeglio Vicini was also on hand to observe the Napoli players.

Napoli had its two new signings Careca and Francini unavailable.
In Careca’s absence Maradona was pushed upfront with Luciano Sola operating in midfield.

Maradona was largely ineffective and it was goalkeeper Claudio Garella who impressed most with his display.

He was beaten in the 18th minute from a penalty kick by Michel and unluckily in the 76th minute when Fernando De Napoli deflected a shot from Tendillo past him.
The penalty was awarded after a foul by Renica on Sanchis.
Real Madrid had Mexican goalscorer Hugo Sanchez suspended, so veteran Carlos Santillana started in his place.

Also missing was International defender Jose Camacho.
Maradona’s unimpressive display led to the headline in “La Gazzetta dello Sport”, ‘Only one spectator, Maradona’.
Leo Beenhakker called it ‘the worst night of his sporting career’, due to the depressing atmosphere of an empty stadium.
He went on to call Salvatore Bagni, ‘a Mafioso’ for his brutish behavior.

The second leg, on September 30, was played in Napol’s San Paolo Stadium.
The attendance of over 83,000 fans earned a World Record Box Office receipts for a Soccer Match.
Prior to the match a minute of silence was observed for Gino Palumbo, the former director of ‘La Gazzetta dello Sport, who passed away the night before.
For Napoli, Francini was in defense in place of Bruscolotti. Francini was assigned with the task of monitoring Michel.
Careca was back in as striker, with Maradona dropping back in his usual position.
Ferrara and Ferrario were assigned to mark Butragueno and Sanchez respectively.
Sanchez was back from suspension in place of Santillana.

Real were still missing Camacho in defense. Chendo and Solana were assigned to mark Maradona and Careca respectively.
Napoli went ahead in the 9th minute, after a cross by de Napoli was headed across by Careca to Francini who stabbed it home, after Buyo had parried his header.
Despite dominating Napoli was unable to score another goal to level the tie.
With a minute remaining in the first half, Emilio Butragueno scored from close range from a pass from Sanchez.

For the second half, Napoli had to score three goals to advance, which was a near impossible task against such a strong Madrid side.
Mino replaced an injured Gallego early in the second half, with Gordillo assuming captaincy.

It was more ill tempered match than the first leg with many free kicks awarded.
Frustrations showed when Andrea Carnevalle was sent off just before the end after a nasty challenge on Buyo. The sending off led to the fans throwing objects onto the field.
Carnevalle had come on the 66th minute to replace the injured Bruno Giordano.

Maradona was singled out by the press for going missing on European nights like during his time with Barcelona.
He managed to finally break his European curse the following season by leading Napoli to UEFA Cup triumph.
As for Real , after this tie, they went on to eliminate Porto and Bayern Munich in the next rounds, but fell to eventual Champions PSV Eindhoven in the semi finals.