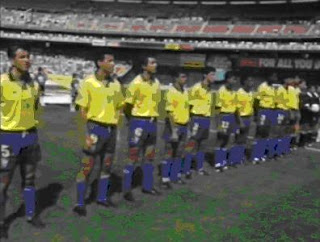 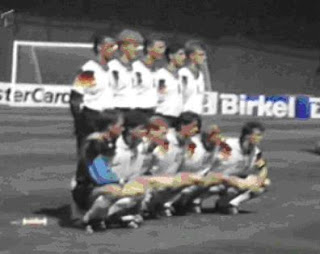 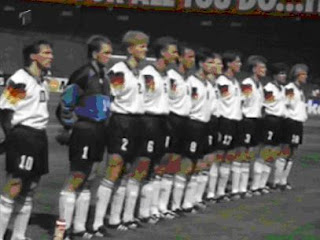 -Match number 573 for Brazil and number 595 for Germany

-This was the 14th meeting between the nations.

-The previous match between the nations at a neutral venue was during the Mundialito Tournament in Montevideo, Uruguay on January 7, 1981, that Brazil won 4 to 1.
Brazilian Captain Rai’s brother Socrates played in that match.

-Brazil’s next win over Germany would a friendly, played in Stuttgart, on March 25, 1998, that Brazil won 2 to 1.
Brazil players: Taffarel, Cafu and Dunga and Germany Players: Köpke, Kohler, Helmer, Ziege, Möller and Klinsmann also took part in that match.
Germany’s Olaf Thon, who was an unused substitute for the US Cup match, also played in this match.
Brazilian Dunga was booked in this match as well.

-This match was part of US Cup. , a dress rehearsal of sorts for the World Cup the following year in USA.
The other participants were the hosts United States and England.

-Brazil had already defeated the United States on June 6th in Hew Haven, Connecticut by a score of 2 to 0 on goals from Careca (5th minute) and Winck (87th minute).
Brazil ended the Tournament on June 13th by tying one to one with England in this same RFK Stadium in Washington, DC.
Marcio Santos scored for Brazil in the 77th minute, after David Platt had opened the scoring for England in the 47th minute.

-For their next two matches in the tournament, Germany defeated the hosts United States on June 13th, at Chicago, Illinois by a score of 4 to 3, from goals by Klinnsman and a hat trick from Riedle.
They ended the tournament by defeating England at Detroit’s Pontiac Silverdome on June 19th by a score of 2 to 1.
Pontiac Silverdome is an indoor stadium.
Effenberg and Klinnsman scored Germany’s goals and Platt scored England’s goal.

-Jurgen Klinnsman scored in all three matches and was named the MVP (Most valuable Player) of the tournament.
Germany were the winners of this tournament on points.

-Brazil were missing even more players.
Due to club commitments, Paris St Germain could not release Ricardo Raimundo Gomes and Valdo.
Deportivo La Coruna could not release Bebeto and Mauro Silva.
Real Madrid could not release Ricrado Rocha.
AS Monaco’s Luiz Henrique was injured.
Romario had been excluded due to indiscipline, though he would be back in the team by September.
Carlos Mozer and Luis Muller were unavailable, as was AS Roma defender Aldair.

-This was Julio Cesar’s 14th and last cap for Brazil. He was a veteran of the 1986 World Cup team.
During the match, his hotel room had been broken into and some of his possessions had been robbed.

-Brazilian substitute goalkeeper  ‘Carlos’ Roberto Gallo, was on Brazil squad as far back as 1978 World Cup.

-Brazil’s Celio Silva, Carlos, Marquinhos and Joao Paulo did not play at all during the Tournament.
Similiarly, Germany’s Olaf Thon and Bruno Labbadia also saw no action.

-The Temperature during the match was in the 90s Fahrenheit (30s Celsius).

-Germany started the match very sluggish, perhaps to to the weather, and were behind 0-3 by halftime.
They managed to score three goals of their own in the second half.

-For Brazil’s first goal in the 13 th minute, Thomas Helmer deflected Elivelton’s shot into his own net.
Helmer then fouled Elivelton in the penalty area, and Careca scored from the spot kick.
Careca then set up Luisinho on a breakaway fro Brazil’s third.

-For the second half, Vogts sent on an extra striker, Karl-Heinz Riedle.

-This was Christian Ziege’s first national team appearance for Germany.

-Christian Ziege set up Klinnsman for Germany’s first goal in the 66th minute.

-In the 80th minute, Substitute Michael Schulz took a shot that was deflected back to his head and diverted towards goalmouth. Taffarel punched out the ball towards Moeller who chested and scored.

-In the last minute, Michael Schulz took a throw- in that bounced on the ground and went over everyone and Klinnsman headed it in for the equalizer.

-On June 14, 1993, Christian Worns of Bayer Leverkusen was called up to the German squad after injury to Jurgen Kohler.

-Nonato earned all his 3 caps for Brazil during this tournament. He never played a full match, he either came on as a substitute or was substituted.

-Luisinho’s eighth and Final cap for Brazil was 17 days later, on June 27th, vs Argentina (1-1 tie) during the Copa America.

-Almir’s sixth and Final cap for Brazil was 17 days later, on June 27th, vs Argentina (1-1 tie) during the Copa America.

-This was Antonio Careca’s last goal for Brazil. His last match was on August 1st, 1993 vs. Venezuela in a World Cup Qualifier (5-1 win).
On August 3, 1993, Antonio Careca withdrew from Brazil squad.

-Immediately following this Tournament, Brazil competed in the Copa America in Ecuador.
Most players in US Cup were excused and the Copa America was used for experimentation.
The following players from the US Cup squad were retained for the Copa America: Taffarel, Cafu, Valber, Boiadeiro, Carlos, Winck, Luisinho, Marquinhos, Almir and Elivelton

-Brazil ended up playing 21 official matches for the calendar year 1993.

-Carlos Dunga was teammates in the beginning of the season with Stefan Effenberg at Fiorentina before he was transferred to Pescara in midseason.
He joined Stuttgart the following season and became teammates with Buchwald and Strunz.

-This tournament was the last time Lothar Matthaus played in the midfield for Germany. Starting the fall season, he was switched to Libero.
He became the 25 th player to be tried in that position since Franz Beckenbauer’s retirement in 1977.

-Brazilian defender Jorginho was teammates with Matthaus, Helmer, Ziege, Thon and Lababdia at Bayern Munich
He was formerly a Bayer Leverkusen player.

-Brazil’s Julio Cesar was teammates with Kohler and Moeller at Juventus.
All three would eventually join Borussia Dortmund. Julio Cesar and Moeller together in 1994 and Kohler in 1995.
Julio Cesar also played for Germany’s Werder Bremen in his career.

-Karl-Heinz Pflipsen never played for Germany again after this tournament.

-Germany’s squad did not contain a single Werder Bremen player, who had just clinched the Bundesliga title.

-Brazil’s Sao Paulo players won the Copa Libertadores and the Intercontinental Cup in 1992 and 1993.

-Cafu captained Brazil to World Cup victory vs. Germany during the 2002 World Cup.
Christian Ziege played the last six minutes of that Final.

-Cafu and Matthaus are record holders for appearances in the World Cup Finals.