The Euros were fast approaching and only months away. The preparation was now entering its final phase. The first friendly of the year was a high profile one against England, who surprisingly had failed to qualify for the Euros. Despite assurances to the contrary, many in the French squad must have been thinking of gaining revenge foe the loss in the 1982 World Cup.
Hidalgo presented his strongest squad to date that potentially would have started the Euros.
Bats was in goal with the set defensive four of Amoros, Bossis, Le Roux and Battiston (right back).
Bossis was back as Libero as Tresor was out of contention. Hidalgo recalled Toulouse goalkeeper Phillipe Bergeroo as back-up.
The ‘Carré Magique’ played for the first time ever together. Platini, the newly elected Ballon d’Or, was at the summit of his game at this point. For the first time all four (Platini, Giresse, Tigana and Fernandez) were available.
Hidalgo decided to experiment by trying out Jose Toure as center forward.
Even though Toure was nominally a midfielder, he accepted the challnege as he wanted to particpate in Euros.
France coud not break through in first half and struggled as the English were physically better in the early going.
This match would also be marred with crowd trouble in the stands from British Hooligans (a precurosr of the horror to come at Heysel the following year).
France raised up their game in the second half and took the lead in the 58th minute when Platini headed in Giresse’s long cross.
In the 72nd, Tusseau replaced the right back Battiston. Amoros switched sides and picked up Battiston’s spot, while Tusseau moved to the left back position.
Just two minutes later, Platini scored France’s second by curling in a free kick to Shilton’s right side.
On this free kick, Peter Shilton later said that he was convinced Platini would have shot on his left side and was utterly surprised that he struck to his right.
Hidalgo was overall satisfied with the performance. Le Roux and Bossis had been very good in central defense. Toure had done well enough in his unaccustomed position of striker.
Platini had been exccellent in the best form of his career. Platini said, “I do not feel that I am specially in form at the moment but it seems all I have to do is to take a shot to score“.
Unfortunately, the experiment of Toure as striker would be all for naught as he would be injured shortly thereafter and miss the Euros.
This would also be Platini’s last match in the season for France as he was busy with club committments for Juventus. He would return when the Final selection process had been made.
Yannick Stopyra was called up for the last time under Hidalgo and he was out of contention for the Euros following a poor season with Rennes that would end in relegation. Thierry Tusseau would not make any more appearances though he would make the Finals squad.

France’s next friendly was vs. Austria in Bordeaux. Platini as expected was to be missing. Alain Giresse would captain France in his home base especially for the occasion.
Hidalgo, dissatisfied with his striker options, decided to recall the Bordeaux veteran Bernard Lacombe, who had last played for France against the same opponent during the 1982 World Cup. Despite his advancing age, Lacombe was still knocking in goals for Bordeaux and had just broken the record as the French striker with the most goals in the History of the French League.
Another newcomer was the uncapped defender from Toulouse, Jean-François Domergue. Not many would have tipped him to make the squad, but they would know of him before the end of the Euros for sure.
Hidalgo also recalled Didier Six for the first time that season. He was playing in the French Second Division at Mulouse at the time, which may have damaged his National Team prospects. However, some fine performances especially in the French Cup, where Mulhouse eliminated Bordeaux had made Hidalgo take notice.
Another Bordeaux player, Rene Girard was also surprisingly recalled for this match. Though he would remain on the bench and would not be called up afterwards either.
Before the match, Hidalgo was concerned how France still had not found their form of the second round of the World Cup.
Hidalgo started with his tried and set defensive base: Bats, Amoros, Bossis, Le Roux and Battiston.

In midfield, Giresse, Tigana and Fernandez took their natural spot. Genghini was drafted in to replace the absent Platini.
Toure’s injury had paved the way to select Lacombe partnering Bellone upfront.
The match turned out to be a dour affair, as the Austrians played ultra-defensively.

Bellone scored a goal in the 12th minute, which was disallowed. France broke the deadlock near the end, when Rocheteau having come on as a substitute headed in France’s winner.
Phillipe Bergeroo would also make a substitute appearance replacing Bats.

The home crowd booed Didier Six, most likely because his club Mulhouse had recently eliminated Bordeaux from the French Cup.
Hidalgo lamented Austria’s tactics, but believed that their choices should be respected and it is up to France to adapt to conditions of matches.
Giresse refused to criticize Austria’s methods. He believed that most adversaries in the Euros were likely to play the same way as France were favorites.
As a result, Giresse felt “we could not have received a better test.”

France faced its sternest test to date by facing West Germany in Strasbourg just two months before the Euros.
Needless to say, the World Cup semifinal and the injustice of the Battiston-Schuamcher incident was on everyone’s mind. In interviews French players such as Six, Battiston and Bossis insisted this was not a revenge match since two years have passed, different context, etc.
Bossis considered West Germany as a test team. He believed such a match would “show where we really stand.”
Juventus did not release Platini and Hidalgo had to contend with other withdrawals. Alain Giresse, Tigana, Girard, Lacombe, Tusseau were all injured or unavailable, while Toure had already been written off for the Euros due to his injury.
Sochaux striker Phillipe Anziani was recalled for his first match for France since facing Brazil in 1981.
Phillipe Vercruysse was also recalled though his chances appeared slim as far as the Finals squad.
Hidalgo decided on a 4-3-3 formation with the defensive set-up left intact. The midfield consisted of Luis Fernandez and the duo of Bravo and Genghini acting as organizers.
Jean-Marc Ferreri was supposed to have started the match, however, he was a substitute as he was ill with fever.
France introduced their new jerseys that they would wear in the Euros. The team played well with Bravo impressing in midfield.
Schumacher was booed in the pre-game warm-ups and during the match itself as not many had forgotten the Battiston incident in the World Cup.
Maxime Bossis only played in the first half, as his club Nantes had a match against Metz the following day. He was repalced by the debutant Domergue.
Battiston took Bossis’ Libero position, Amoros moved to the right back position in Battiston’s old spot and Domergue went on the left back position.
Hidalgo would later jokingly state, “be careful Max, at your age, if you leave your position, you are not certain to get it back“.
Genghini would score France’s winner with just ever ten minutes remaining by volleying from close range.
While Domergue earned points to make the Finals squad, Anziani was not recalled again by Hidalgo and was out of contention, as was Phillipe Vercruysse also not recalled afterwards.
Franz Beckanbauer would say afterwards “in this form, France are unbeatable”.
Foe more detail, see :
http://soccernostalgia.blogspot.com/2011/05/april-18-1984-france-1-west-germany-0_24.html 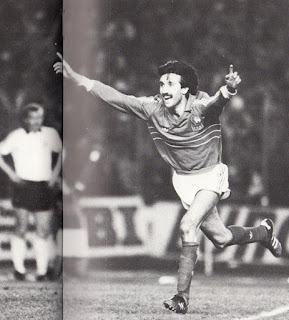 On May 7th, 1984, Michel Hidalgo announced his list of 20 players for the Euros.
The main novelty in his selection was the call-up of previously uncapped Albert Rust as the Third goalkeeper. Rust was the starting goalkeeper of the Olympics squad.
Incidentally, Albert Rust would the only player to have been in the UEFA European Championship and Olympic wining squads in that summer of 1984.
In some sources, there was a proposed match vs. Republic of Ireland (for May 9th) that was called off.
The Final phase of the preparations was set at Font-Romeu.
Like most experts, Hidalgo felt France were favorites to triumph in the Euros.
He stated, “our greatest victory has been to lift ourselves up after the tragedy of Seville” (World Cup 1982 semifinal penalty kick loss to West Germany)

After selecting his Finals squad and training, France played two practice friendlies against Andorra in a semi-practice setting.
Their Final preparation match ahead of the Finals was against Scotland. Hidalgo said, “I chose Scotland because there is a mix of styles (British and Scandinavian), ahead of match vs. Denmark”.
He selected his strongest lineup that was to start the Euros with.
The defensive unit had been established for some time: Bats, Amoros, Bossis, Le Roux and Battiston.
Likewise, the midfield was set for quite some time, though it had not played as a unit due to injuries and availability.
The midfield of Platini, Giresse, Tigana and Fernandez has since been recognized as one of the greatest in History.
Upfront lack of options had forced the recall of Lacombe with the young Bellone as partner.
France, playing in a 4-4-2 formation, comfortably won (2-0) this last match with goals by Lacombe and Giresse.
Second half substitute Didier Six was booed once more, this time by the Marseille crowd, for his contentious past with the club  (one of his many previous clubs).
Hidalgo underlined the strength of his defense by pointing out that this was the fifth match that they had kept a clean sheet.

France would go on and triumph in the Euros with Platini in magnificent form. However, it almost came unstuck in the first round.
Hidalgo had spent two years to fashion a defensive unit. However, in the first match vs., Denmark, Le Roux was lost to an injury and Amoros was sent off and suspended for three matches.
Hidalgo was forced to move Fernandez in defense as well as including the untested Domergue, but it worked out in the end and Hidalgo retired after eight years holding the Henri Delaunay trophy.