This is part one of the 70th episode of the ‘Soccernostalgia Talk Podcast’. As always this is Shahan from Los Angeles and I am joined by Paul from Shipley in England

For this episode, we have a special podcast. Earlier this year, Paul proposed the idea to commemorate the 40th anniversary of the 1982 World Cup, by interviewing some of our regular guests, who would have been around and lived through the World Cup.

This was not meant to be in-depth or analytical analysis of the tournament.

We just want to hear personal memories of the event and then compile everyone’s responses spread into one or two podcasts.

Myself and Paul will also include our own memories in the end.

The 1982 World Cup was a formative football experience for Shahan and myself. As an eight-year-old football fan, this tournament was my introduction to the global game beyond Europe, and the 40th anniversary seemed worth commemorating. Through the podcast and Shahan’s network of contacts, we have fans who watched around the world in 1982 sharing their experiences and memories. I have to say the only disappointment was not being able to get a guest from Northern Ireland – we tried to get hold of several fans and even players, but unfortunately without any luck. Thank you to everyone who contributed to the podcast, and we hope you enjoy these interviews and memories of a great tournament, the 1982 World Cup.


For this first part, the following shared their memories of the 1982 World Cup:

As always feel free to leave questions and comments.

You may also follow the podcast on spotify and now on Google podcasts, Apple podcasts and stitcher all under ‘Soccernostalgia Talk Podcast’ 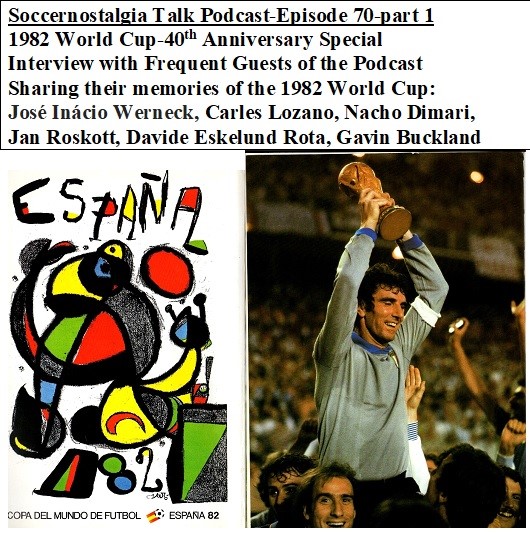