-Match number 558 for West Germany and number 552 for Uruguay.

-This was the 7th meeting between the nations.

-The previous match between the nations was during the 1986 World Cup in Mexico in Querétaro on June 4, 1986 that ended in a one-one tie.
West German players: Andreas Brehme, Pierre Littbarski, Lothar Herbert Matthäus, Rudolf 'Rudi' Völler and Thomas Berthold also took part in that match. 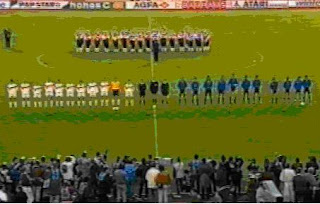 -The next match between the nations, as well as Germany’s next victory, would be a friendly in Montevideo on December 20, 1992 that West Germany won 4-1.
West German players: Olaf Thon, Jürgen Kohler, Thomas Häßler, Guido Buchwald, Lothar Herbert Matthäus and Jürgen Klinsmann also took part in that match.
Buchwald, Haessler and Klinnsman scored for Germany in that match.

-West Germany’s previous victory over Uruguay was on June 8, 1977 when they defetaed Uruguay 2-0 in a friendly in Montevideo. 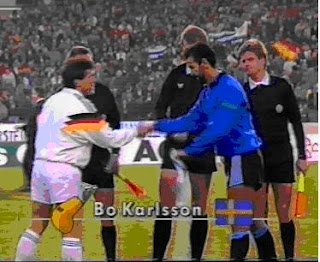 -The next match between the nations, as well as the next on German soil, would be a friendly in Karlsuhe on October 13, 1993 that West Germany won 5-0.
West German players: Jürgen Kohler, Thomas Häßler, Guido Buchwald, Lothar Herbert Matthäus and Jürgen Klinsmann and Uruguay Player:  Santiago Javier Ostolaza Sosa also took part in that match.
Buchwald scored for Germany in that match.

-Lothar Matthaus and Pierre Littbarski were the only German players who were in the 1982,1986 and 1990 German squads that reached 3 straight finals.

-This was a preparatory match by both teams for the upcoming World Cup in Italy. 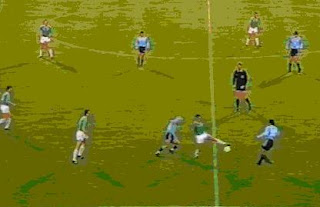 -West Germany would wear the green jerseys for the World Cup semifinal on July 4, 1990 vs. England.

-Uruguay has not defeated Germany since their very first meeting on June 3, 1928 during the Olympics when they won 4-1.

-Stuttgart’s Neckarstadion had not hosted a Germany match since the World Cup Qualifier on October 16, 1985 that West Germany lost to Portugal 0-1.
Thomas Berthold, Andreas Brehme and Pierre Littbarski also played in that match.
The next match hosted by Stuttgart would be at the end of the year on December 19, 1990 and the re-unification match vs. Switzerland (4-0 win).
Bodo Illgner, Thomas Berthold, Jürgen Kohler, Guido Buchwald, Thomas Häßler, Lothar Herbert Matthäus, Jürgen Klinsmann and Rudolf 'Rudi' Völler also played in that match.
Voller and Matthaus scored in that match. 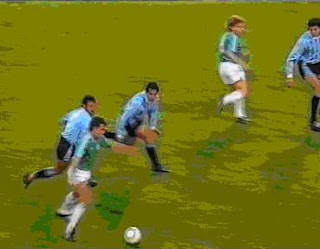 -Guido Buchwald was playing in his home club’s stadium.

-All 6 goals were scored in the second half.

-The absent Francescolli and Rudi Voller were present and future Olympique Marseille players. 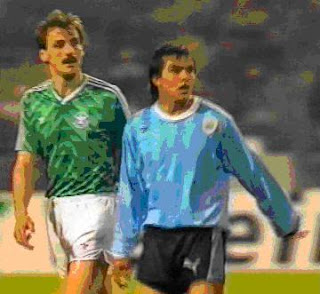 -The absent Francescolli was teammates with Ruben Paz and West Germany’s Pierre Littbarski for one season at Racing Club Paris for 1986/87 season.

-All of West Germany’s goals were scored by Italy based players, as well Uruguay’s first by Aguilera.

-West Germany’s Matthaus, Brehme, Klinnsman, Berthold and Voller were Italian Serie A based players.
Uruguay’s Aguilera, Perdomo and Paz also played in Italy for Genoa.
West Germany’s Haessler and Kohler were future Serie A players.
Haessler joined Juventus at the end of the season. Kohler joined Juventus a year later, though by that time Haessler had joined AS Roma.
Uruguay’s Jose Herrera, Daniel Fonseca and absent captain Enzo Francescolli also joined the Italian Serie A by the next season by signing for newly promoted Cagliari.
Both Francsecolli and Aguilera also played for Torino.
Ruben Sosa was then a Lazio player and future Internazionale FC Milano player.
He would be teammates the following season with West German striker Karl Heinz Riedle at Lazio who did not play this match.
Uruguay’s Ruben Pereira also eventually joined Italy’s Serie A. 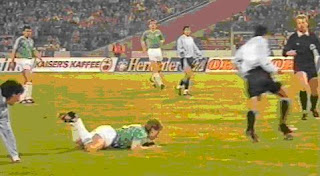 -Carlos Aguilera had to leave Italy by 1993 due to the possibility of facing criminal charges by the Italian authorities.

-Haessler and Kohler were also teammates for one season at Dortmund, 1998/99 season.

-Ruben Sosa and Jurgen Kohler both joined Borussia Dortmund in 1995.

-All the German players were part of the Finals squad that won the World Cup on July 8th of that year vs. Argentina. 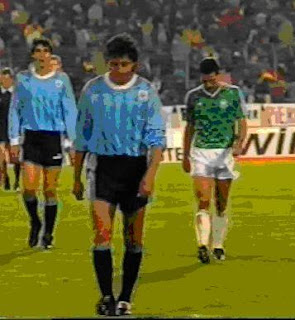 -All of Germany’s goals were conceded by second half goalkeeper substitute Raimond Aumann.

-Uruguay goalkeeper Eduardo Pereira Martinez’s performance did not help his cause to be Uruguay’s starting goalkeeper, particularly the free kick by Matthaus.

-The first time Germany had conceded 3 goals or more in a match since a friendly vs. Asutria on October 29, 1986 (1-4 loss).
West Germany had not conceded 3 goals at home since losing a friendly to Argentina on September 12, 1984 (1-3 loss) at Dusseldorf for Franz Beckenbauer’s first match in charge.
The next time they would concede as many goals would be vs. Holland on June 18, 1992 during the UEFA European Championships (1-3 loss).

-Hugo De leon captained Uruguay in the abscence of Francescolli.