Spoiler Alert: I assume most people have already seen these films; as a result I discuss the plot as much as I can. I will not try to go into every detail but generalize as much as possible.

‘The Game of Their Lives’ (also known as ‘The Miracle Match’ in some releases) is a dramatic portrayal of the 1950 USA World Cup team that defeated England in one of the biggest upsets in World Cup History.
The film stars a pre-Hollywood fame Gerard Butler and Wes Bentley portraying respectively the goalkeeper and the Captain of that Team.
The film was released in 2005, at a time where USA’s Professional League (The MLS), had been in existence for almost a decade.
Needless to say, the film did not receive a wide release (if any at all, I certainly don’t recall it) in a Nation where Soccer is still not a spectator sport despite vast improvements since the inception of the MLS some two decades ago.
In fact the film starts at the 2004 MLS All-Star game, which I presume is supposed to symbolize the advance of the game in the States since its modest beginnings.
We see real footage of players such as a young Landon Donovan and others playing in front of a vocal crowd and other shots of the stadium. 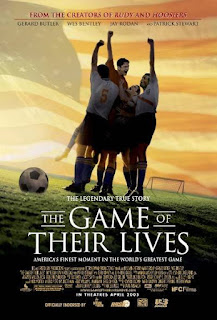 Where to begin with this film? If only the sports clichés were all that it had against it. There are so many factual errors that go against any good intentions the film might have had.
More importantly there is no epilogue to explain the fates of so many of the players involved, most importantly Joe Gaejtens who disappeared and assumed killed by the Haitian authorities in 1964.
The central theme of this film is that Dent McSkimming (as portrayed by the older Patrick Stewart) is narrating the events as a witness.
The real McSkimming passed away in the 1970s.
Another error is the fact that the other Group matches in this World Cup (vs. Chile and Spain) are completely ignored.
In the film we get the impression that the match vs. England was USA’s first match in the Cup. It was in fact the second match. The USA lost its first match on June 25th, 1950 vs. Spain (1-3). The match with England was a few days later on June 29th.
Another point of contention is that while it is true that Walter Bahr was USA’s Captain, for the match against England Ed McIlvenny had been given the captaincy (As a favor due to his Scottish background).
The film makes many references (that are I assume supposed to be comical) that the unfortunate Joe Gaejtens practiced voodoo. By all accounts it is assumed that he was a devout Catholic.
In addition, Stan Mortensen did not participate in that tour of USA with the English League Selection (setting aside the unlikelihood of such a speech in a post-match banquet).
Events in the film are over dramatized with music and clichéd dialogue that do not appear to be worthy of such distinction (the Uniform scene at the Air Force Base, walking instead of taking the bus, etc..)

All this aside, truly what could be gauged from this victory? The events at the MLS All-Star match seem to indicate that the game has made inroads in this country. While that may be true to some extent certainly this match in 1950 had no bearing at all in the sport here.
Once they returned to the States, the game was for all intents and purposes restricted the Immigrant communities and arguably is still not the spectator sport that most would have hoped for.
This was a one-off event that is footnote in the history of the sport even in USA that has been over dramatized in a movie that certainly did not do justice to the people who were involved in it.
This film will most likely be remembered as one of Gerard Butler’s early works (that he is probably embarrassed about and would cringe if anyone mentioned it).