Spoiler Alert: I assume most people have already seen these films; as a result I discuss the plot as much as I can. I will not try to go into every detail but generalize as much as possible.

In the beginning of ‘Mean Machine’ we see Danny ‘Mean Machine’ Meehan in an ‘Umbro’ Commercial in a spoof of a James Bond like character.
We then see the slightly aged Danny Meehan sitting in a room full of Football Memorabilia from his playing days in a drunken stupor watching the commercial with liquor in his hand with self-loathing.
‘Mean Machine’ is the British remake of the 1974 Hollywood film ‘The Longest Yard.’ In that film, Burt Reynolds portrayed a former NFL star who is sent to prison after a run-in with the law.
This UK version (2001) was produced by Guy Ritchie, shortly after his successful films ‘Lock, Stock and Two Smoking Barrels’ and ‘Snatch’. In fact many of the actors who appeared in these two films appeared in this one.
One of those actors, Vinnie Jones, the former Football star and Wimbledon Hard-Man, portrays Meehan (a former English International and Captain) who is sent to Prison after giving chase to two police officers while driving drunk as well as getting into a physical confrontation with the same police officers.
This assault leads him to be sentenced to three years in Prison (to be spent at the ‘Longmarsh’ High Security Prison). 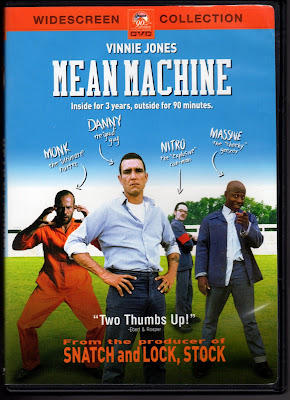 Nitro enters the fray to endear himself to Ratchett. He tips off the guards on one of Sykes’ Drug Operations within the prison and then lies to ‘Kat’ by laying the blame on Meehan.
Later that day ‘Chiv’ and ‘Kat’ ambush Meehan in the shower. ‘Chiv’ is about to stab him in the eye, when Meehan overpowers them. At this time, Chief Burton and guards enter the showers. Meehan quickly covers the knife with his towel thereby saving ‘Chiv’ from further trouble.
This act earns their respect and ‘Chiv’ is eager to join the team but needs Meehan to ask permission from Sykes. Meehan formally asks Sykes for the involvement of his lads. As an inducement, Meehan suggests that Sykes can bet on the result.
Sykes agrees but his condition is that Meehan has to fight one of his guys, which turns out to be ‘Kat’.
The fight in question involves the two men to be sitting down and lock their hands in an arm wrestling position. They then take turns in punching the other followed by a shot of cognac.
After taking a heavy beating Meehan finally gets the upper hand and wins and gets Sykes’ boys in his squad. 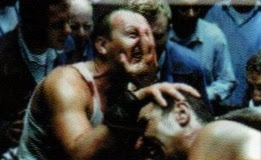 In the team Meehan will take the center Midfield position. The position of goalkeeper is vacant. ‘Chiv’ suggests the inclusion of Monk (Jason Statham).  Despite his status as a dangerous inmate, Sykes is able to pull strings and have him join the squad.
The respective teams step up their preparations. The Guards (with Burton in charge) appear orderly and professional like, while Meehan’s crew is still adjusting.
To further place pressure (and threat) on Meehan, Sykes informs that he has bet on them to win.
Meehan is able to analyze the opposition tactics by getting hold of videos of Guards recent games from Tracey, the female secretary, and the pair engage in a ‘quickie’.
This is followed by a strategy meeting in Sykes’ cell, whereby Meehan is finally asked and reveals the reasons for being involved in match fixing (fame too soon, gambling debts, etc..)
Ratchett has a plan to remove Meehan from the squad, by assigning Nitro to place a bomb in Meehan’s locker.
However, the Locker is opened by Doc and not the intended target Meehan and Doc gets killed.
For this Nitro gets transferred to a Prison that is more of a mental asylum.
Onto the matchday and we hear clichéd pep talks from the respective sides’ managers (Burton and Meehan).
The radio commentary for the Prisoners is done by two inmates (played by Jake Abraham and Jason Flemyng (another Guy Ritchie connection)).
The pair report on the match in a humorous way with much banter.
The Prisoners squad is called ‘Mean Machine’, wearing Black shirts while the Guards wear Red/white Horizontal striped shirts.
Needless to say, there is a lot of kicking and foul play as each side tries to intimidate the other.
In a funny exchange, Meehan takes two free kicks in succession directed at Ratchett’s crotch.
Chances go begging from each side, as neither side is able to make a breakthrough.
There is a running gag of Monk coming out of his line and putting his team in danger (along with Monk imagining in black and white committing violent acts on the guards), but all his teammates are afraid of telling him to do otherwise.
Finally the Prisoners take the lead as Meehan volleys in the opener. Shortly afterwards Ratchett instigates a general fight that involves everyone. The halftime whistle ends this and the teams go to their locker rooms.
The Governor, having bet on the Guards, senses defeat and worse (given his gambling debts). He enters the Guards locker room and threatens the entire squad with their jobs.
He then has a private meeting with Meehan, instructing him to throw the game. He blackmails Meehan by claiming that he has a written confession from Nitro, which specifies that it was Meehan who had sent Doc to his locker to have him killed.
This could potentially get him up to 20 years.
A distraught Meehan goes back onto the field but he is out of sorts and makes virtually no effort. The Prisoners are handicapped further when Raj gets sent off, leaving them one man short. Despite this, The Cons manage to score a second goal.
It is at this point that Monk’s antics cost the team. He tries to dribble his way out of his box (a la Rene Higuita) and gets dispossessed and the guards pull one goal back.
Meehan feigns and injury to get off, much to the dismay of ‘Massive’ who senses the obvious.
Afterwards Ratchett scores a goal to level the match at (2-2). Slowly Meehan’s pride and anger takes over and gets back on the field determined to win.
Despite the initial mistrust of his own teammates, he starts to make inroads and wins balls and creates chances.
It all seems for naught as the Guards are awarded a free kick in the last minute. Monk heroically saves the effort and in the ensuing counterattack Meehan races part everyone and is alone with the open goal at his mercy. After some moment of close-ups on the protagonists, he does not score and instead lays a pass across for ‘Billy the Limpet’ to score the winner with the last kick of the match.
At the end of the match, the Governor threatens Meehan but Burton steps in and fights back with the Governor. Burton honorably congratulates Meehan for a good game.
Meehan walks away smiling and celebrating with ‘Massive’, with his pride intact.
This film was essentially a vehicle for former Professional Vinnie Jones, who had recently turned to acting.
Ironically Jones plays a fairly level headed character, which was in contrast to his fiery and controversial character of his playing days.
In addition, Vinnie Jones’ character is an English National team player, whereas in reality Jones was a prospective Irish National Team player who earned International caps for Wales.
‘Mean machine’ is fairly predictable, irrespective of whether anyone has seen the original ‘The Longest Yard’. It follows the general narrative of a fallen hero earning redemption to claw his way back to respectability. Although, it is not necessarily a comedy, it does have a lighter tone.

Note:
1-A remake of the Original  ‘The Longest Yard’ was also made in 2005 starring Adam Sandler in the Burt Reynolds role.