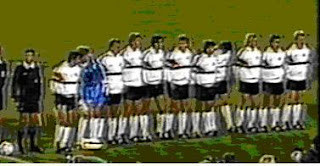 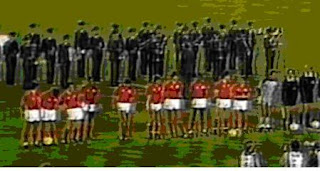 -This was England’s first loss since the loss vs. Sweden on September 1986.
-The previous match between the nations on German soil was on February 22, 1978 (2-1 West German win).
-The previous match between the two nations was a 3-0 English win in Mexico’s Azteca stadium on June 12, 1985 during the Azteca 2000 Tournament.
West German players: Herget, Brehme, Thon and Littbarski and English players: Shilton, Sansom, Hoddle, Reid, Lineker, Barnes and Waddle were the players still remaining from that match.
Both Managers were also present during that match. 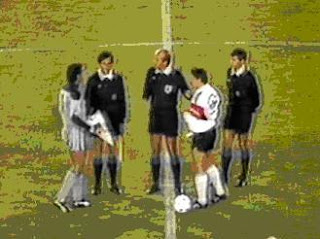 -Pierre Littbarski scored on a direct corner Germany's second goal.  German Wuttke scored after coming on as a substitute.
-England’s previous victory over West Germany on German soil was a 1-0 Friendly win on May 12, 1965 at Nuremberg.
-West Germany’s previous victory over England was a 2-1 away Friendly win at Wembley on October 13, 1982.
West German players: Allofs and Littbarski and English players: Shilton, Sansom and Mabbutt were the players still remaining from that match.
England manager Robson was also present at that match.
-The next match between the nations would be the World Cup 1990 Semifinal on July 4, 1990 that West Germany won on a penalty kick shoot-out after a 1-1 tie in Turin, Italy.
West German players: Kohler, Buchwald, Brehme, Reuter, Thon and Völler and English players: Shilton, Pearce, Waddle, Beardsley and Lineker were the players still remaining from that match.
Lineker once again scored for England. Andreas Brehme scored West Germany’s goal.
Both managers were present during this match as well.
-England’s next victory over Germany would be a 1-0 win on June 17, 2000 during the UEFA European Championships at Charleroi, Belgium.
No players who were present in this match took part in that one.
-West Germany’s Rudi Voller and England’s Glenn Hoddle became national team managers of their respective nations.
John Barnes also managed Jamaica.
-West Germany’s Pierre Littbarski had just rejoined Fußball-Club Köln that season after spending one season in France playing for Racing Club Paris.
-Fußball-Club Köln had on their squad former English international Tony Woodcock who was no longer in national team reckoning. 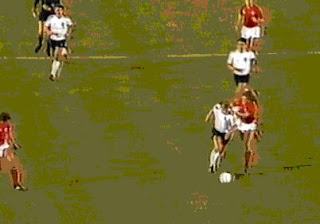 -Both managers managed UEFA cup winning sides. Robson managed Ipswich Town FC in 1981 and Beckenbauer managed Bayern Munich to victory in 1996.
Both ended their national team managing careers within one day of another. Robson managed England for the last time on July 7, 1990 vs. Italy (Third Place match), while Beckenbauer led West Germany to the World Cup win the next day on July 8, 1990.
-West Germans Allofs and Voller and Englishman Waddle, all played at some point in their career for French club Olympique de Marseille.
Englishman Trevor Steven who was unavailable at this match would also play for Olympique de Marseille.
West German manager Beckenbauer also briefly managed Olympique de Marseille, with Waddle as one of his players.
-West Germany had already played a friendly vs. France a month before and their league season also had started sooner than England. This was England’s first match of the season.
Therefore the Germans were sharper and fitter.
-Both Eike Immel and Frontzek joined the English Premier League (both joined Manchester City). 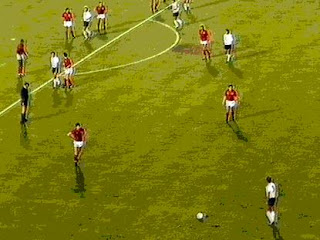 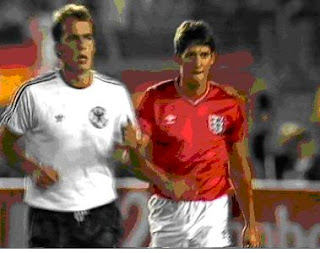 -Englishman Neil Webb earned his first cap as a substitute. In doing so, he became the 1000th player to be used by England as an international.
-Before the match, Beckenbauer had called Linekrer and Beardsley as the ‘world’s best strikers’.
Match Reports:
Deutschlands Fussball Landerspiele
The best of enemies-England v Germany
England, The Complete Post War Record
Chronik der Deutschen Fussballs
Match Video / Highlights: