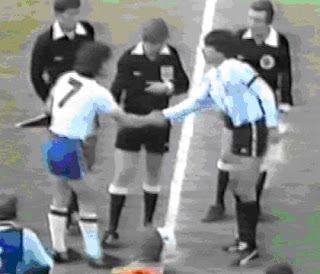 -This was Argentina’s first match at Wembley since a Friendly on May 22, 1974 that ended in a 2-2 tie.
England players: David Watson, Kevin Keegan and Trevor Brooking were the players still remaining from that match.
-The previous match between the two nations was a 1-1 tie on June 12, 1977 Friendly at Buenos Aires.
England players: Clemence, Neal, Cherry, Ray Kennedy, Watson, Keegan, and Wilkins and Argentina players: Passarella, Tarantini, Gallego and Luque were the players still remaining from that match.
England’s Keegan captained England in that match as well.
-Argentina’s previous victory over England was a 1-0 win on June 6, 1964 at Rio de Janeiro, Brazil during the Nations Tournament.
-England’s previous victory over Argentina was a 1-0 win during the infamous 1966 World Cup Quarterfinal at Wembley on July 23, 1966.
The match made famous by Argentina Captain Rattin’s sending off and England manager Ramsey’s “Animals” remark.
-This would be the last match between the nations before the Falklands War on April 1982. As a result the teams did not play each other for the next 6 years.
-The next match between the two nations would be on June 22, 1986 during the 1986 World Cup in Mexico.
The match ended as a 2-1 win for Argentina.
The match made famous by Maradona’s “Hand of God” goal as well as his marvelous solo goal.
Argentina’s Diego Maradona and England’s Kenny Sansom were the only players still remaining from that match.
-The next match between the nations at Wembely would be a 2-2 tie on May 25, 1991 during the Friendly England Challenge Cup.
-Both Captains Passarella and Keegan managed their respective national teams, as did Diego Maradona.
- This friendly match has been noted to be as one of the only matches between the nations that was not marred by some type of on or off the field controversy.
-This was Argentina’s first match in their 1980 European tour. They would go on and play vs. Republic of Ireland and Austria as well.
-Argentina’s Star from the previous World Cup Mario Kempes was unavailable for this match, as his Spanish club Valencia CF had retained him for the upcoming Cup Winners Cup Final vs. Arsenal.
Argentina’s English based pair, Osvaldo Ardiles and Ricardo Villa (both of Tottenham Hotspur FC) were also not called up by Argentina manager Menotti.
Villa was out of national team reckoning and Menotti was still unsure whether to include Ardiles for his 1982 World Cup plans.
Striker Daniel Bertoni was also missing for Argentina.
-Argentina was awarded their penalty kick after Maradona was fouled by Sansom in the box.
-Argentina defender Alberto Tarantini had played in England the previous season at Birmingham City FC. His stay there had ended with him jumping into a crowd to fight a heckling fan.
-Argentina’s Carlos Luis Ischia and England’s Gary Birtles earned their first caps.
-Seven of Argentina’s players had been in the 1978 World Cup winning side.
-This was the third time England had beaten a reigning World Cup champion at Wembley.
-Both captains (Keegan and Passarella) scored in this match.
When Passarella was about to take his penalty kick, Keegan stood right behind him and with his finger indicated to Clemence that Passarella would kick to the left side. He was right, although Clemence was unable to stop the shot.
-England would not defeat Argentina until June 7, 2002 during the 2002 World Cup in South Korea/Japan. England would win 1-0 on a David Beckham penalty kick.
-Tony Woodcock and Kevin Keegan were England’s only foreign-based players. They both played for clubs in West Germany.
All of Argentina’s players were home based.
-Due to Hugo Eduardo Villaverde’s injury, Olguin played as Argentina’s stopper. Van Tuyne replaced Olguin as right back.
-This match was also billed as the battle between Maradona and Keegan, the two best players in the world.
-At the end of the match the Wembley crowd chanted, “You are no longer Champions”, but applauded Maradona who left the field after swapping shirts with Keegan.
Match Reports:
England v Argentina-World Cups and Other Small Wars
England, The Complete Post War Record
Onze, June 1980
El Grafico Number 3163
Match Video / Highlights: